We would like to introduce you to a sweet little guy named “Boomer”. He was a stray found in Bemidji, MN and was brought to animal control. His time was up so RAGOM was contacted and he’s now living the good life with our foster family. 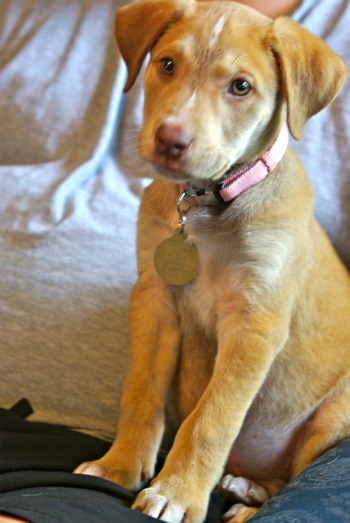 Since Boomer was a stray, we don’t know anything about his background. That’s okay because his story starts today! He visited the vet today and he weighs 10.2 pounds which is normal for a puppy his age. The staff at the office had many different guesses as to what breed Boomer is but they all decided that “mixed breed” was the best description.  The vet estimated that he is 8 weeks old, so we have set his birthdate as 4/12/12. Boomer got his first set of puppy shots and treatment for fleas and roundworms which are common in puppies. 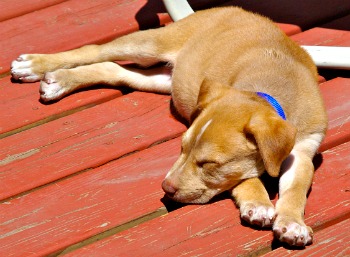 Boomer is adjusting well to family life. He is eating and sleeping well. He is coming out of his shell and becoming a bit more playful each day. He does have sharp little teeth and likes to chew on hands and toes. He is easily redirected with chew toys and a firm “no biting”. Boomer is crated when we are away from home (which is not very often) and also during the night. He whines for about 3 minutes before settling down to sleep. He is  in the crate from 10pm- 6am. He’s still working on keeping the crate clean during the night.

He is doing as expected with potty training. He has had a few accidents in the house but he’s just a little guy getting used to the rituals and routines around here. Boomer is the first puppy that we have decided to bell train. We have a set of bells hanging near the sliding glass door and we ring them each time we bring him outside. Boomer goes outside every 20 minutes or so during the day and he is rewarded with a small treat after doing his job.

Boomer gets along well with our resident yellow lab....who just seems to ignore Boomer.  I think Boomer would like to play but Skeeter has been kind of grumpy.  He loves all three of our kids and takes turn napping in their arms. He also loves to nap on the deck. 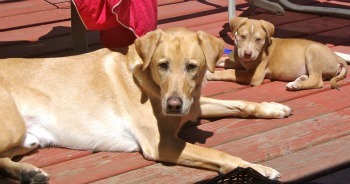 Boomer will be neutered soon and ready for his forever family. If you are interested in meeting Boomer, please contact your placement advisor. Boomer can’t wait to hear from you!