Buck is a male Golden Retriever about 8 years old being fostered in Glenwood MN. Buck came to us through a Vet in Alexandria who had him for two weeks. Any other history is unknown. He was groomed and clipped close while at the Vet because of mats. Groomer said he was pretty calm during that procedure. 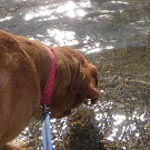 Buck is a very mellow, easy going fellow. He never barked at the Vet or at our house. He has balked at getting out of the car twice and did get out with assistance but without actual balking twice. We think it might be a security thing, being in a close space. Once out of the car, he seems fine. He steps up the one stair into the house without a problem but has not attempted to go down the stairway to our basement. When we call him to come down with us, he just walks past the stairs and stays upstairs. We will work with him on this.

He has been sleeping in a crate in our bedroom. We closed the door the first night and left it open last night. He slept there all night. The Vet checked him with other dogs and with cats and he had no issues. We have a cat and he pays no attention to him.

We took him to our Vet today for his initial exam, shots and microchip placement. Blood and stool checked out fine. He is heartworm negative. He has to get all of his vaccinations as if he hasn’t had any because there are no records. He took a dose of heartguard. Dr. Jean thinks he has some arthritis in his front elbows so she gave us some medication for that. There is a skin tag on his left eye that may have to be removed in the future and he does have some cataracts forming. He can stand to lose about 10 pounds. He weighs 92 today.

Buck is just a sweet boy and likes attention and being talked to. He does not seem to know commands, so we will work on “sit” for sure. He does walk very well on a leash without pulling. We plan to step up his exercise (and ours). 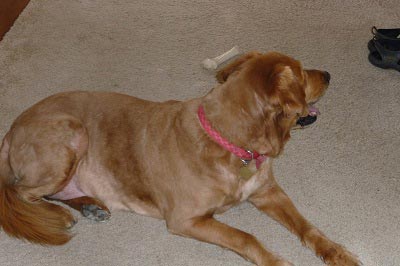