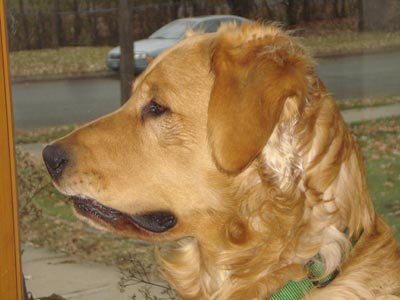 It is our pleasure to introduce you to Diego (12-366). He is 18 months old (DOB 5-1-11). He is a beautiful boy with a medium color coat and dark eyes and nose. He has a very small scar on his nose. His mother was a PB Golden Retriever. His SO believes the father was too. He weighs 61#. Diego was surrendered because he lived outside and kept wandering off. Diego was neutered in September. We went to the vet last week and he is up to date on all of his shots and was micro-chipped. He was negative for heartworm, but did test positive for roundworms. He is being treated and will be rechecked 11/19/12.

Diego was a bit apprehensive at first when he met our resident Goldens, Sunny (10-285) and Hank (10-240), but within 20 minutes they were off playing. He has found his place in the pack now. He is really good with children. He hasn’t been exposed to cats.

Diego has a typical Golden personality. He loves people, seeks a lot of attention, and wants to please. Diego came to us having never been inside a house, worn a collar, or had obedience training. He is a trooper!

Most of all Diego is a sweet boy. He loves to snuggle at night and gives lots of kisses. He is very affectionate. He would do best in a home that has a fenced in yard based on his history of wandering. He will also need to be enrolled in a basic obedience course. You must also be comfortable with lots of kisses! He can’t help himself. 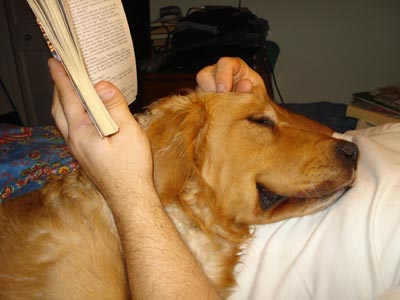