As you can plainly see, Ean has to be one of the most handsome guys around! And happy, happy, happy all the time. :o)

Ean was surrendered to RAGOM because his owner was enlisting in the Air Force. This young man did an excellent job in training Ean. He knows sit, lay, shake (both paws!), and high five. He's very smart, to say the least.

Ean is a 2 yr. old Golden/Aussie mix. He has a beautiful fur coat that feels like silk. He's neutered and will be brought up-to-date with all of his medical necessities at his vet appointment. For right now we do know that Ean has a problem called mega esophagus. He needs a high quality dog food that is softened with water.

He came into our home and had absolutely no problems meeting the four resident dogs, even the snooty little Lhasa/Daschund mix! When meeting humans, he will bark and sometimes growl. As soon as he sees the RDs getting pets and attention, he realizes he's missing out on good things so he mellows out in less than 2 minutes. Then he won't let you stop with the pets and loves! He's truly a velcro pup, this guy.

When taking him on a walk through our neighborhood this evening he did pull slightly, but he isn't used to being on a leash either. So, all in all, he did very well. He came with his own crate and goes into it with no fussing. You just have to say "time for bed".

In his previous home he lived on a lake in a quiet country setting. Also, he had free roam. He is currently fenced in his foster home - just safer that way - and he respects baby gates indoors.

Check back later in the week to find out what new things we've learned about Ean. Plus we'll give you an update regarding his vet visit. 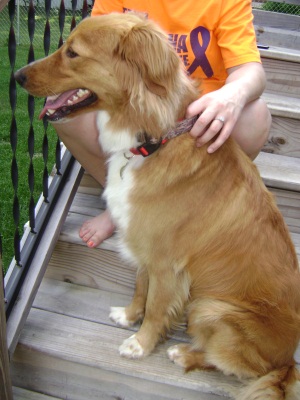 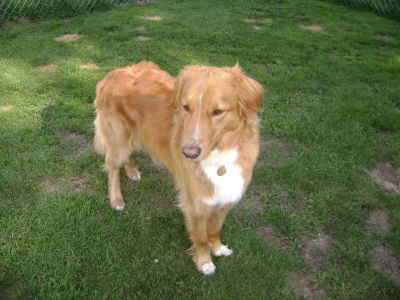 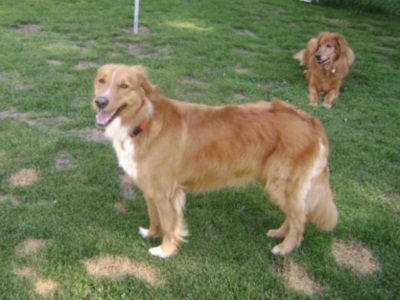