May 18, 2010:  Imagine a tall, broad-chested young Golden Retriever. His eyes are bright. His coat, a rich copper, gleams in the sun, and his feathering streams like fraying silk in the breeze. He is so handsome, his owner names him "Fabio."

And then the man dies, and Fabio's fortunes turn. 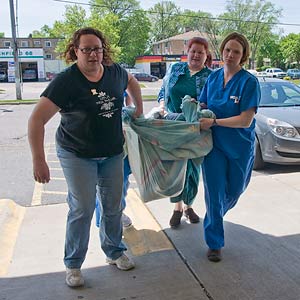 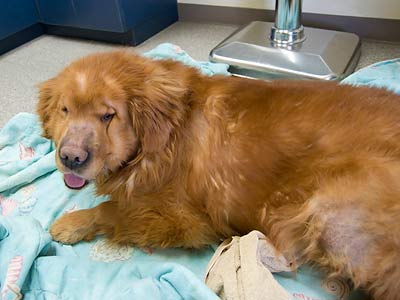 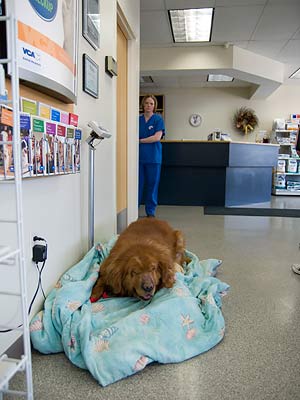 He winds up in a substandard breeding operation, where he is confined to a chicken coop, forced to lie hour after hour in his own excrement. He develops a medical condition, which triggers seizures and causes his weight to balloon. He spends so much time lying on a hard, abrasive surface, he grows huge, fluid-filled calluses on his elbows. Staph infection breaks out over his skin, and his once-beautiful coat—now dull and thatchy—begins to fall out, creating stark, hairless patches on his nose, tail and flanks.

Nearly incapacitated with lethargy and the devastating effects of his condition, he loses interest in people, the world around him, even in-season females. Immobile and spiritless, Fabio waits to die.

But just when the situation looks darkest for our down-on-his-luck hero, the plot turns. Fabio and four females are rescued from the breeding facility and taken into RAGOM.

Six-year-old Fabio arrived in the Twin Cities this week. Because he is weak and resists walking on a leash, he had to be carried into the animal hospital. The scale revealed his weight at 132 lbs.

His weight is, of course, a very visible issue, but Dr. G. also expressed concern for his face. The skin over his forehead is so lax and heavy that it slips downward and presses his eyes closed, causing him to live in a world of partial darkness. Between this issue and the fat deposits in his face, this purebred Golden Retriever looks much like a Chow Chow.

Dr. G. suspects that Fabio has hypothyroidism, which would explain his obesity, seizures, skin condition and potentially also the slack skin on his head, as a lack of thyroid can cause skin to lose its elasticity.

Fabio also has a growth on his lip that will need to be biopsied and removed.

The first order of business is determining exactly what's going on with Fabio's body chemistry and getting him on an effective treatment. He is now on antibiotics for his staph infection and receiving drops for his infected ears. He cannot be neutered until his staph infection has cleared up.

If ever there was a Golden Retriever that needed help, it's Fabio. He will require veterinary care and hospitalization above and beyond the typical RAGOM dog. We will always do what we can for a treatable dog like Fabio. But it will be costly.

Fabio will need some angels to help sustain his journey back to health—back to being the dog he once was. Won't you please consider supporting Fabio with a full sponsorship of $325, or whatever you can afford? Donate  Thank you!

Be sure to check back here for updates on Fabio, because it will be an amazing journey indeed.