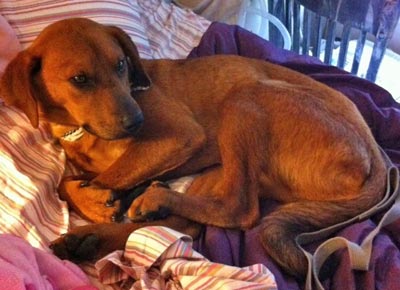 Handsome arrived last night, either from Kansas (that's where his vetting paperwork is from) or Missouri. He had been picked up last fall/winter, along with his mother and siblings, and brought to a kill shelter. He was the only one left from the bunch and RAGOM stepped in. He was transported to Minneapolis yesterday, arrived last night, was picked up and taken care of for a few hours by Jeanine, and then I picked him up late last night so he wouldn't have to go to boarding. Jeanine said that he had been very mellow and cuddly, despite warnings that he was "very scared" and a "flight risk" as his paperwork indicated. I've found him to be the same--he's a delight! A very happy boy, very cuddly and curious but really mellow. And he is aptly named!

Handsome is rumored to be a mix of golden and possibly Tree Walking Coonhound. He's definitely got some hound in him--his face shows it, but the dead giveaway was last night when I put him in the kennel, and then headed upstairs with the resident dogs. After about 15 minutes, there was some soulful baying from the living room. It was adorable. I thought I'd wait and see how long it went on, but it didn't last long before he fell asleep. He did great in the kennel by himself, even with the stupendous thunderstorms last night. Early this morning, there was some more of that baying, when he was telling me he wanted to go outside.

He's kind of petite, maybe 40-45 pounds (I'm guessing) but he has huge feet and a big adorable head. He's got an adorable curly tail, and a speckled black tongue, gorgeous black eyeliner around his gorgeous eyes and dark whiskers. His coat is fairly short, dark reddish brown with some darker highlights.

He's in great shape--clean ears, pretty clean fur--and he's got a great personality. He's been exploring when he can, and when it's time to settle down, he has no problem napping by my feet. Or this morning, he jumped on the bed and showed what a cuddler he is. He met the cat, and was totally non-plussed, but the cat thought he had to teach him a lesson anyway and gave poor Handsome a swat on his nose; all he did was look bewildered after that. He's done great with the resident dogs, following Moe wherever the action is. He ate his food nicely this morning, and then went and found a few stray bits of kibble. He's not totally housebroken, I found out, as he had an accident this morning, but now that I know, I'll keep an eye on him and try to get that training started. HE LOVES affection, and can't get enough pets! He also loves bones. He seems to have a great personality and is a very sweet boy. I look forward to seeing how he does over the next couple of days! 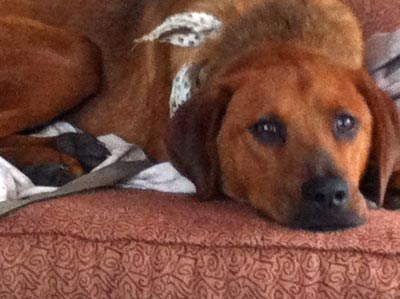