Korbin is a 1-2 year old golden mix that was found as a stray in Iowa. Thanks to our awesome RAGOM transporters he arrived at our home earlier this week. As you can see from his pictures, Korbin is adorable! Although he is a mix he looks exactly like a minature buff-colored golden retriever. Everything about him makes you fall in love with him...from his gorgeous eyes to his golden personality. 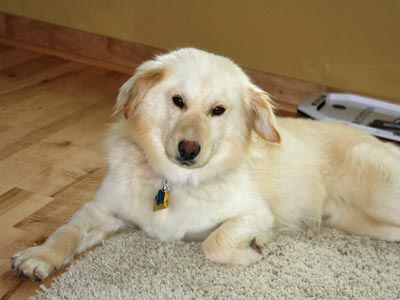 He met our two children (ages 5 and 7), as well as our resident RAGOM dog without problems. He has even gotten our resident dog to play with him, which is a no easy task. At first he was intrigued with our resident cat, but now he just leaves him alone. He has had a few accidents in the house, but this is not uncommon with a new foster and not knowing their cues. We tried to crate him and he did not stop whining, so crating is a work in progress. Korbin stays in our laundry room when we are away and does fine with being in the laundry room. No whining or being destructive, in addition, he stayed in the laundry room for 7 hours yesteday and did not have an accident. At night he sleeps in our bedroom with the door closed and has not had an accident. Much to our dismay, he does not want to sleep in the bed with us. He prefers to sleep in the bathroom on the tile. Bummer, because I think he would be a perfect size for cuddling. 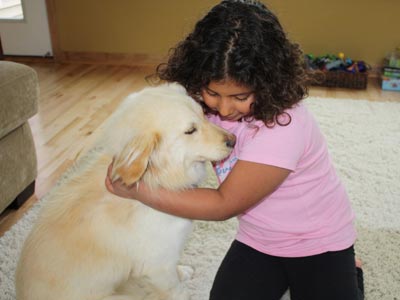 Korbin went to the vet and is healthy. He weighs 33 pounds, which the vet said is acceptable, but 5 pounds off would be excellent. I asked the vet what he is mixed with and she thought Shiba Inu, but it is anyone's best guess. Either way he is gorgeous! He was neutered and did have to wear the cone of shame for a day, but is healing well and has not been slowed down by the surgery. As I write, he and our resident dog are playing in the other room, which Korbin loves to do, but also respects when it is not time to play when our resident dog is not interested.

Korbin is ready for adoption, so if you are interested in meeting a fantastic little golden, contact your placement advisor. Korbin will also be at the Eden Prairie event this Saturday from 12-2 pm. Come out and meet him. Get ready to fall in love! 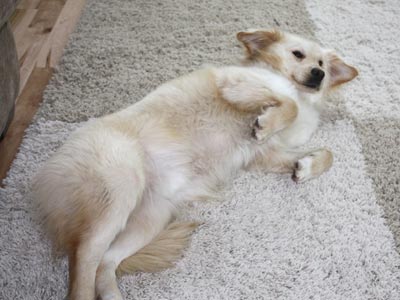