I have the great pleasure of introducing the fabulous Lucky to all of you RAGOM fans!! Lucky is an extremely handsome, light gold, 5 year old PB golden retriever. He came into RAGOM on an urgent basis last week with his best buddy and brother Shadow 12-180, as his prior owner unfortunately had to move, and the only place for the dogs was outside in the stifling heat. Well, I’m happy to say both dogs were quickly picked up by a wonderful volunteer and placed in foster homes, and are now looking forward to beginning their new lives!! 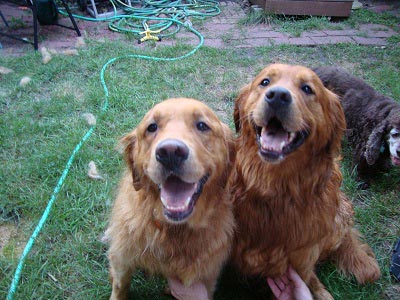 Lucky has been to the vet, and is now microchipped and UTD on all vaccinations and preventatives. He is a tall boy, and carries his 87# very well, but could use to lose a few pounds. He is neutered, heartworm negative, and his fecal was also negative. Only problem is a minor infection in both ears, currently being treated with antibiotics. Lucky’s old vet records indicate that he was hit by a car in 2009, and had some left sided tenderness, but my RAGOM vet did an extremely thorough exam, and nothing was out of order at all. He also had no follow-up visits at his prior vet relative to that incident.

I just have to tell you – I always rave about my fosters, because I love each and every one dearly, but this is one incredible dog. He is sweet, well mannered, and oh so very loving. He is housetrained, and goes to the door when he needs to go out. He sleeps like a baby through the night – partially on the bed (his decision the first night he was here!) and the rest of it on the floor pressed up to the side of the bed on a blanket. He does not need a crate at all, and I think would be very unhappy in one. He has no issues with kids, cats or other dogs, and fit in without a hitch with residents, Belle and Bear! 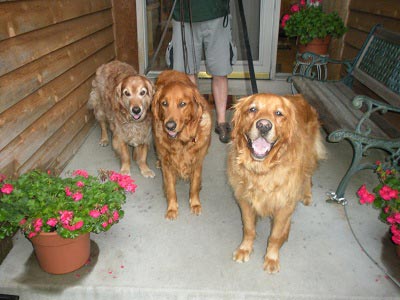 He LOVES to go for walks, and only pulls for a little bit on a flat collar at the beginning. His stamina is great, but I swear, he is interested in every single blade of grass along the way! He is great in the car, and hops right in with no urging when the door is open. It stormed very badly the first night he was here, and it didn’t faze him in the least. Can’t say he feels the same about vacuum cleaners, but unfortunately that is a fact of life with golden retrievers! His recall is excellent, and though I have him leashed in my unfenced yard, I feel he would be able to be taught his boundaries relatively easily – he’s a very smart boy!

Lucky has the “golden paw” and “golden lean” down to an art form. He loves to have his tummy rubbed, and loves to give kisses – look out! About the only fault I can find in this wonderful boy at the present time is he does like to jump up to get attention, when he doesn’t feel he is getting his well deserved due. He doesn’t jump up when you’re standing - just at times when you’re in a chair and he wants more reassurance. Because he is a big boy, this could be an issue with some people and smaller kids, so we will be diligently working on it! 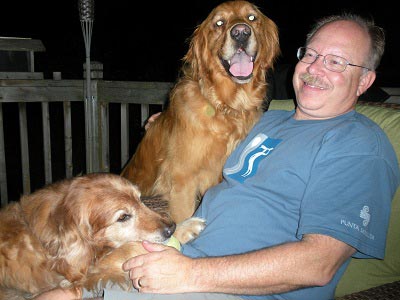 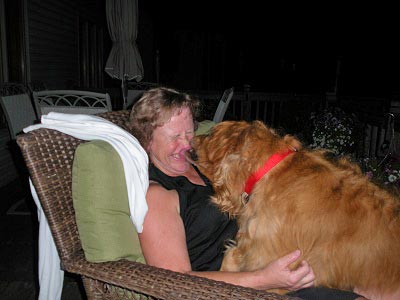 Lucky is in the process of moving to his permanent foster home in Rochester, as a needy senior RAGOM foster is coming to live with us, but we certainly had time, room, and plenty of love for Lucky-dog in the meantime!! This is one wonderful dog – I’ve fallen in love with him in a few short days, and I don’t think he’ll last long in foster care. If you’re interested in this sweetheart, please contact your placement advisor! 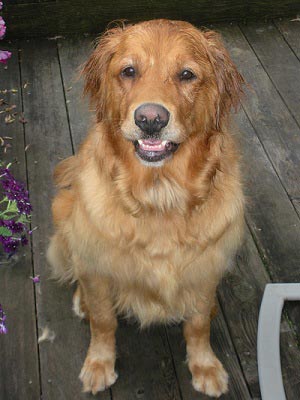