We have had Tucker in our home for 1 week and are so honored to have him here. He is an incredible 9-month-old puppy that wins the hearts of everyone he is near. Tucker is a lover. All he wants is to cuddle, be petted, and have his belly rubbed! He's such a lover that he follows us everywhere... even to the bathroom! If you're okay with a constant shadow in your life, you'll love Tucker. :) Tucker also likes to meet other people. As soon as he sees anyone, he immediately flops over on his back to have his belly rubbed, though if he's overly excited or nervous when he does this, he will pee. Other than those mishaps, he never pees or poops in the house. He is fully potty trained and will go to the door when he needs to go out. He also knows the commands: sit, stay, come, shake, and lay, although he doesn't do them consistently. 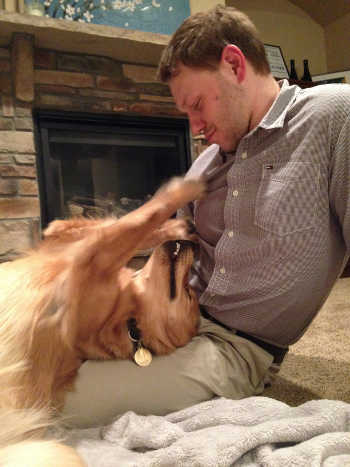 I work from home, so Tucker has not been home alone for more than 4 hours. When he has been alone, he just sleeps near the window and happily greets us when we get home. We also take him out on walks about 5 times per day. Since we don't have a yard for him to run in, we want to ensure he gets ample amount of structured exercise. Walks are definitely not his strong suit. I don't know if he's ever been on a leash or has gone on walks in the past. He jumps around like a bucking bronco and bites at his leash. He also likes to tug and pull a lot, just puppy-like behavior, though I'd say in the last couple of days, his walking has gotten a bit better. Tucker LOVES snow! On our walks, he'll dive into the snow banks, shoving his head way down! Sometimes he'll just jump into the snow bank and just sit there watching and smelling his surroundings. 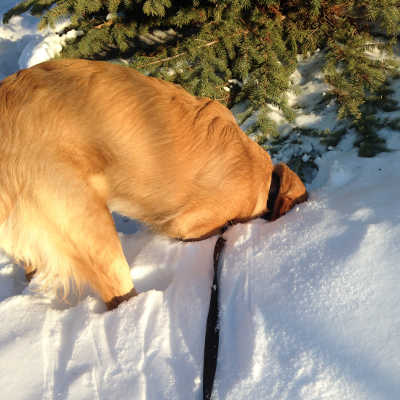 We haven't seen Tucker around any kids. His previous owner ran a daycare, so he was around them at all times, but in his kennel. There was a reported incident that he growled and snapped at a little girl who tried to grab his brand new bone. We would also like to note that when Tucker gets excited he jumps a lot and gets nippy. This could potentially be hazardous to little kids, though he's really just a sweetheart that wants attention, and to love and be loved in return.

Tucker is a pure joy and has brought so much life to our home. When I work during the day, he just lays under the table next to me. Periodically throughout the day, he'll put his paws up on the chair so he can get some lovin. Other than laying under the table, he also likes to lay next to our patio door so he can watch the people and cars drive by. We had some visitors at our house this past weekend. When they rang the door bell, he barked at them and would jump on them when they entered the house. We're working with him now to get him to stop jumping when visitors come or when he gets excited, though as soon as our visitors sat down at the table, he laid under the table with us. He doesn't beg for food, bark, or whine; he just lays there. He has a very nice combination of being lazy and energetic/playful. 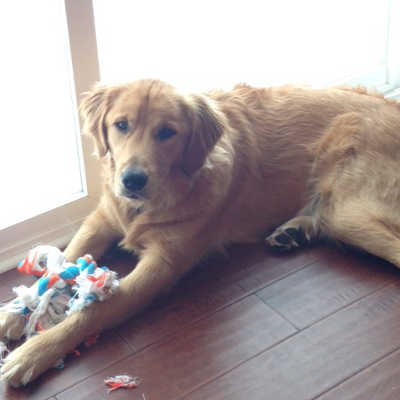 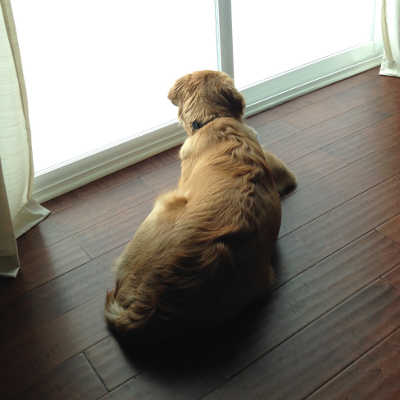 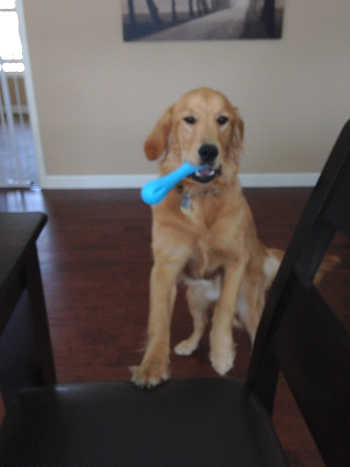 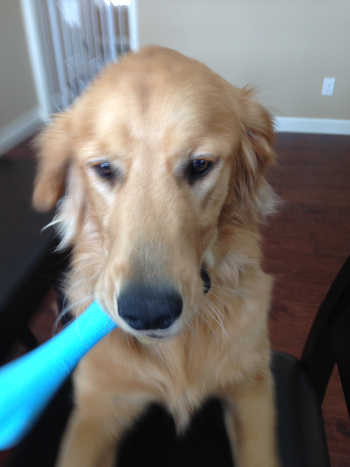 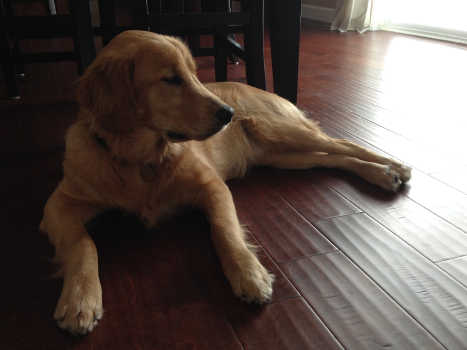 We think Tucker has a bit of a prey instinct in him, or he's just very curious about smaller animals. Tucker has gotten very excited about our cat, and has lunged and chased after her. We think he just wanted to play, but aren't too certain about that. Today on one of our walks, we came across a small Scottish Terrier that Tucker got overly excited about. He was almost obsessive about him and was trying to run at him. He has not shown this type of behavior with larger dogs, but we think Tucker would thrive being an only dog. He LOVES attention, and if it had to be split between two dogs, he would probably be a bit sad.

Tucker has been on a car ride with me once to the vet. At first, he was reluctant to get into the car and when he did, he showed nervous behavior. He would constantly pant and his back legs were a little shaky, but on the return trip, he jumped quickly into the car, wasn't shaky, but still panted.

Since Tucker is our little shadow, he sleeps in our bedroom with us. We do have a crate for him, but he prefers to sleep on the floor next to one of us. He's so adorable because he'll start out by laying in bed in between us, but as soon as the lights go out, he jumps on the floor for the night. Depending on the time we go to bed, he won't get up until between 4:30am - 6:30am.

Tucker is one of the best 9-month-old puppies we have ever encountered. He's just a little lover that aims to please. He's calm and lazy the majority of the day, and gets energized when it's time to go outside or play. He adapted to our home and lifestyle very quickly, within 2 days... except for the cat. He's a complete sweetheart and will make a family incredibly happy! 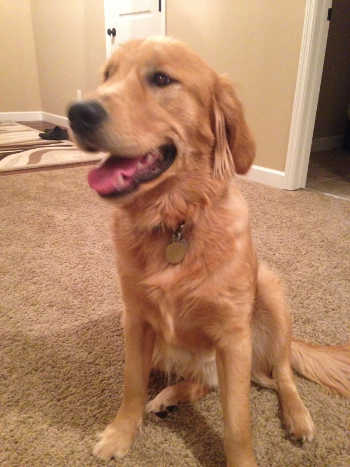 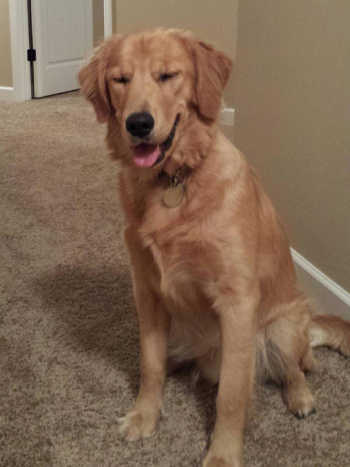 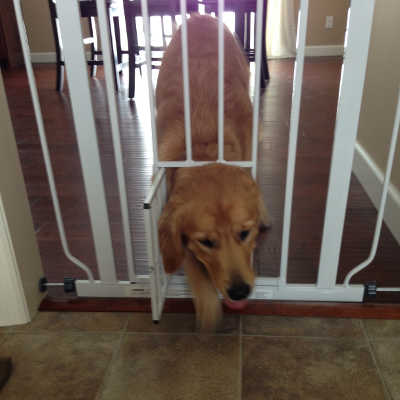 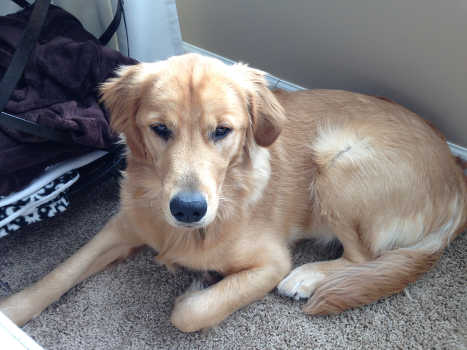 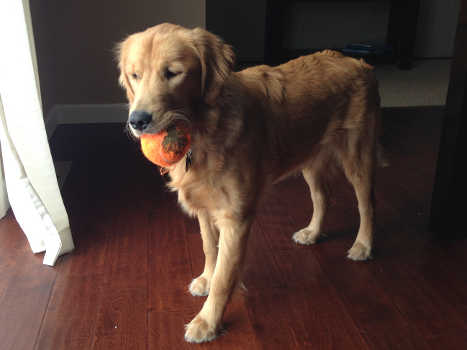