I’d like to welcome the newest member of the RAGOM family—Velvet! Let me tell you a little about this sweet, scared girl. She’s a golden mix, estimated to be about 5 years old, weighing 56.6 pounds. She looks mostly golden, but she’s got something in her with those ears! We’ve only had her for 3 days, so we are still learning more about her with each day. From what we know, she used to live on a tie-out at a trailer park. A little over a month ago, there was an argument between two people at the trailer park. Around the time of the argument, someone went over towards Velvet (we don’t know why), but she was clearly scared and there was a bite. Due to the bite, Velvet had to be quarantined for 10 days. During this 10 day period, her owners decided to relinquish her to the shelter. The shelter called RAGOM and once again, we are saving another dog! Velvet went to a foster home, but at the time we didn’t know much about her. We quickly learned that she cannot be around cats. She has a high drive towards them. Unfortunately, there wasn’t another available foster at the time, so poor Velvet went to boarding. She stayed there for 16 days until we were able to pick her up on Saturday. Now she’s safe in our loving house, but is still very stressed. I’m pretty sure I’d be stressed if I spent the majority of the past month living in a kennel. We are taking a guess that she did A LOT of barking while in the kennel because her barks are very “hoarse” sounding. Hopefully, once she settles down, her voice can rest and she will get her normal bark back. Only time will tell. Considering what she’s been through, she is a really sweet girl.

We went to the vet today because she has loose stool with blood in it. The vet did a fecal test, which came back negative for parasites (YAY!), but had a high clostridium count. She is now on some meds and a bland diet to try to get her on a regular schedule. Other than that, she looks like a healthy little girl. It does look like she may have been a mama before. After Thursday, that won’t happen again because she’s going to get spayed.

Some other things about Velvet in the short time that we’ve had her:

Well, those are a few things about our newest RAGOM girl. If you’d like to find out more about her, come visit the RAGOM booth at History Cruze Night and Car Show this Friday night from 6-10 p.m in North St. Paul. This will be her first event and which may pose to be too much stress for her, but we are going to see how she does. We will be there closer to 6 p.m., so if you want to meet her, come early! 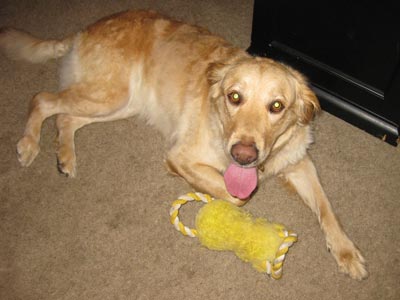