Pat and Greg, Molly and Annie

Sponsored by Christy Cotroneo-Williams in memory of her Foster failure boys at the bridge: Mr Chips, Andy, and Linus ❤️

Happy spring to the golden seniors from anonymous

I'd like to introduce Yukon to everyone. He came into RAGOM on 7/22/2012. He was surrendered because his SO no longer had time for him with their busy schedule.

Yukon is a 12 year old [DOB 7/19/2000] Purebred male Golden Retriever with papers. He weighs in about 80 lbs. He is in very good shape and has the energy of most dogs half his age. I take him to the vet on 7/30/12 to get UTD with vaccines, general check up and blood work.

Yukon was an outside dog all his life. He has had no accidents in the house to date since I got him.

Yukon met my resident Golden ,Ziggy, 2 foster dogs [Nala and Hemmy] and my house cat and 9 week old kitten with no problems at all.

Yukon had laid in a very stinky mud puddle earlier in the day that I picked him up so a bath was in order. He was very good about getting washed outside with the garden hose. I lathered him up twice. He smelled much better afterwards. His fur was matted very bad so I started brushing the mats out. The stink has come back so another bath will be in order once the mats are gone. Yukon loves being brushed.

I took Yukon walking while it was still near 90 degrees and we walked over 2 miles. He was barely panting. [can't say the same for me] He is in very good shape.

The first night Yukon was nervous, as most foster dogs are the first night. I had him contained to my bedroom and bathroom. No potty accidents overnight.

The second day went well. Still no potty accidents. That night we had thunderstorms. The SO told me that Yukon had some storm anxiety and had tried to get in the house. Yukon got very nervous and jumped up on the bed and paced. I'll be working on what can be done to calm him during storms.

Yukon is said to love water and swimming. The SO said he will run and jump off docks.

Yukon has been raised around kids of all ages with no problems at all.

Some things that need to be done yet are: 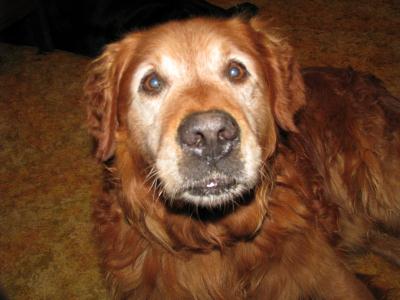 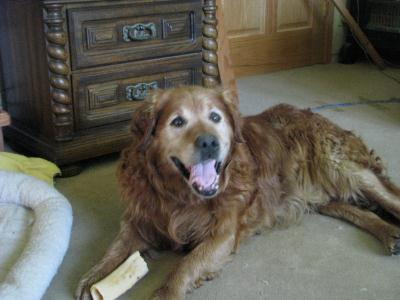 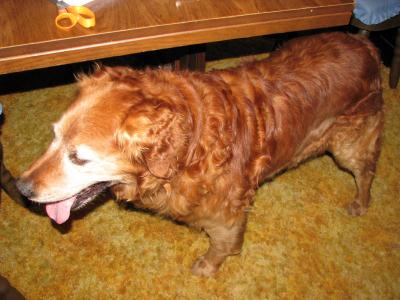