Judith C.
"For sweet Anna, our girl from the Magic City to the Golden Life!"


I can’t wait to tell you about the sweetest little Anna you are ever going to meet.

First, the basics: She’s about three years old. She was a stray that ended up in a pound in Minot, North Dakota, and then was pulled from the pound by a RAGOM volunteer when her time was up, on or about 07/08/14. She is now being fostered in Andover, Minnesota, a northwestern suburb of the Twin Cities. She does not require a fence, is probably kid friendly, is dog friendly, and is cat friendly.

Other than being all-around friendly, Anna is small and compact, weighing only 22.6 pounds, and in the words of one of my fellow RAGOM volunteers, “If we look deep enough into her DNA, I'm sure we'd find some Golden in her.” The big story with our little Anna is that she arrived at the pound in heat and stopped bleeding 2 days after her arrival there. It is unknown if she bred with another dog while on the loose. So, we are waiting with baited breath to find out if she is pregnant or not. It’s still a bit too early to tell for certain, and so we have to be patient and let nature take its course. On the good side, it does give my family and I a chance to spend more time with her, because we can’t adopt her out until she is spayed, and we can’t spay her until we can rule out pregnancy. My family is happy to keep Anna around for a while, and you are all lucky that I’m not in the market for a dog right now, because I’m totally smitten with this young lady!

She has so much going for her and very few negatives. I get compliments on how pretty she is when I take her for walks. She is young, but past the giddy puppy years. She is smart, house trained, fine with other dogs so long as they don't get in her face, playful with other dogs that have good manners and like to play, good with cats, and she loves to snuggle with all members of the household. She is not destructive and appears to have no fears, and she loves riding in a car. She appears to be unfamiliar with a crate, but is adapting beautifully. She does like a lot of attention, but when I am busy, she just lays down and waits for me. She has not been around many young children yet, but she has been fine with them when we encounter them in our neighborhood, and she is very friendly, so for now, I’m going to say that I think she will be fine with kids.

The only negative behavior I've found is that she is sometimes mouthy, such as the time she did a play-bite to my sleeve when she wanted me to play with her. For this reason, she might not do well with toddlers or small children, because they will not know that she is not actually biting them, but is just trying to entice them to play. We are working with her on this – because she loves attention so much, when she uses her teeth while trying to play with us, we don’t give her any attention at all; we just turn our backs on her or we put her in her kennel for about 2 minutes. We also redirect her to use one of the toys we have, which are just fine for sinking her teeth into, and which we are glad to attempt to chase or tug away from her.

In addition to not being spayed and possibly being pregnant, Anna did have a few other health issues. She had lots of sneezing and had yellow discharge out of her nose, along with some vomiting that was likely caused by all the excess mucous. Since her appetite was OK and she had no fever, the vet thought it was likely a virus, maybe exacerbated by the buildup of tartar on her teeth. However, when the sneezing and yellow discharge did not let up, the vet thought perhaps the nasal issue was bacterial, and so Anna has been on antibiotics for the past few days, and I’m happy to say that the respiratory issue seems to be clearing up now -- the discharge is now much less and is clear and runny, and she hasn't vomited for two days now, and she is happy and perky, and life is good. Her teeth are still bad and need to be cleaned, but she’ll need to be sedated for that, and that’s not even a possibility so long as she might be pregnant. I’m glad Anna is with RAGOM now, because we will find her a home that can love her AND can take good care of her. This little cutie patootie certainly deserves it!!

Anna will be on the antibiotics for a few more days, and I think the vet will attempt to check to see if she is pregnant again around the first or second week of August, so I’ll keep you posted! For Anna’s sake, I am hoping she is not pregnant – her life will be so much easier, and then we can get her spayed, and then she will immediately be eligible for adoption. I did want to get the word out about this wonderful dog so that any interested families can contact their placement advisers. In the meantime, I’ll have to find out the protocol for working with families when a dog may or may not be pregnant. I do know that if Anna does turn out to be pregnant, it will be a long time before she will be available for adoption. I also know that she is completely, totally, absolutely worth it!!!

Oh, and about her pictures – she doesn't like the flash, so I've been trying to get photos of her outside. However, when we are outside, she hardly ever smiles at me, because she is constantly on the alert in case she might catch a glimpse of a varmint – Anna thinks varmints are about the most interesting thing in the world, and while she comes right in when I call, evidently looking for them varmints is serious business, because I can hardly get her to look in my direction while we are outside, and never with a smile on her face – yet she smiles and wiggles her little butt at me on a regular basis. So, while I did get a photo showing her cute, curly tail, what you are seeing here, so far, is focused attention on the world around her, which is probably part of why she is so smart. I’ll see if I can capture some of the adorableness in future updates, OK? 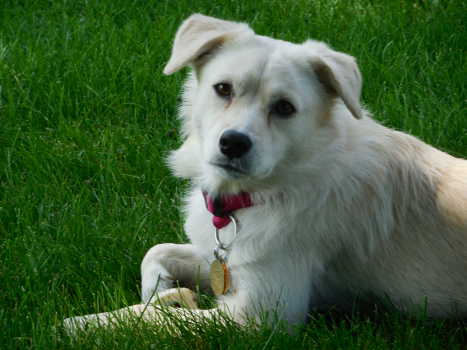 Bone in the grass 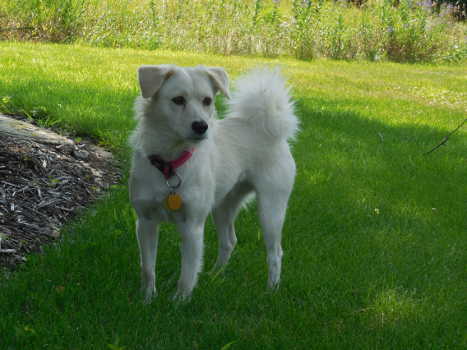