Please welcome Curvy to RAGOM, named after the curve in the road where she was found. She arrived at our home almost two weeks ago, and has settled in and become pretty comfortable. I think she has a ways to go before she feels truly like she belongs, and by then of course, she may be on her way to her forever home. Such are the beginnings for a RAGOM dog – a few bumps in the road to a new and happy Golden life.

Curvy has a lot going for her. She is a pretty girl with a beautiful, dark red coat. She loves, loves, loves the human touch and will stay by you for petting as long as you are willing to pet her. 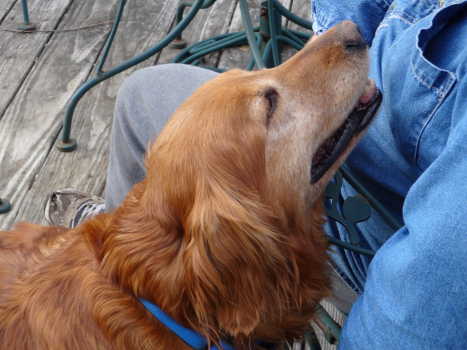 Curvy came to RAGOM as a stray, so nothing is known of her history. She obviously loves being with people, yet more than once she has approached us in a crouch when we called her over – going lower and lower the closer she came. This was obviously fear-based. Also, we don’t know if she never learned to play with toys or other dogs, or just isn’t comfortable enough yet. Just the last couple of days, we have finally seen her pick up a toy and play a bit. So far, she has completely ignored a tossed tennis ball. She is reasonably social with our two resident dogs, a 2 ½-year-old Golden Retriever, Lucy, and a 7-year-old Shih Tzu, Benny. Our Lucy wants to play with every dog she meets, but Curvy has not been interested. She has shown more interest in Benny than Lucy, but not for play. She has done some good sniffing and tail wagging with him, but so far that is all. She will run to the back of the yard with them when they go on a tear after something they have seen or heard or imagined. :-) But nothing we have seen would make us require a second dog in her forever home.

As a stray, she was considered to have been unvaccinated. So she has been to the vet and brought up to date with shots. She will need a booster in a few weeks. She tested negative for heartworm and is now on preventatives. She does have a little mark on her eyelid that I thought might be a growth of some kind. The vet looked it over very closely and thought that it was more likely a scar from something. She is a little overweight. She weighed in at 71 pounds, and the vet thought the mid to low 60s would be a good weight for her. So she could stand to lose 5-8 pounds. She got a pretty clean bill of health with one exception. She has a grade 2 heart murmur. This is not necessarily a concern; many dogs live long lives with heart murmurs and never have any clinical symptoms. The vet said that if he had seen her two years ago and the murmur hadn’t changed, he would not be concerned at all. However, since we don’t have a history for her, we don’t know if she has had the murmur for years, or if it is a new development.

She has ear infections on both sides that we are treating with drops and ear cleaning. She is really good about letting us treat them. On a similar note, she had big hair balls under both ears and she was SO VERY patient with us while we worked at cutting them out. She is at her happiest when with a person. She is responding to her name, even though she has had it only a week or so. Or, maybe she is just responding to our voices. Whatever, she is very responsive when we call her over, even when she is in the rear of the yard. 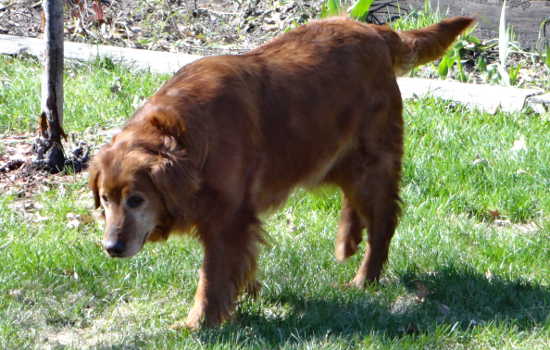 Because she was a stray, and because she did also ‘escape’ once from the home of the people who first found her and kept her until RAGOM could pick her up, we will be looking to place her in a home that won’t rely only on boundary training.

She did display some storm anxiety the other night – panting and shaking – but we have seen worse with other dogs.

As I said before, Curvy seems pretty sociable with our RDs for the most part. She is not interested in playing, but sometimes moves around the yard a bit with our Golden. She hasn't shown any resource guarding of THINGS. I usually stand between our RD and Curvy when they are eating, but I haven’t seen anything to concern me about guarding food. She has resource guarded a PLACE, if that makes sense. Our dog will sometimes walk by the place where Curvy is settled – her safe spot for the moment – and Curvy will let out a growl. We think there has been an improvement since she has started to become more comfortable with our house and our dogs. And there has been absolutely NO aggression towards people. She loves when we enter “her” space for love and pets and wags her tail when we approach.

Curvy was spayed almost a week ago and is recovering very nicely. We think Curvy will thrive in a home where the people have time to give love and attention to her. If you are interested in meeting Curvy, please contact your placement advisor. We also plan to bring her to the RAGOM Meet and Greet at Chuck and Don’s in Mahtomedi, MN, on Saturday, May 17th. 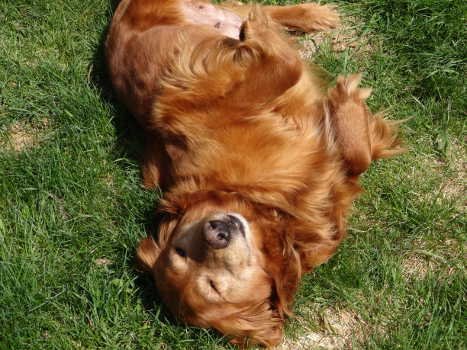