Please welcome Jake 14-055 to RAGOM. Jake is a 9 year old neutered male pure bred Golden Retriever. Jake weighed in at 90.5 lbs. He is at least 10 lbs. overweight. Jake had is wellness exam, got brought up to date on vaccines and got micro-chipped. Jake had the more advanced blood panel done since he is thought to be 9 years old. Jake is in excellent health, has no parasites and is negative for heartworm and Lyme Disease.

Jake came to RAGOM from a 80 acre farm in western North Dakota. He was surrendered because his owners were moving to a small house in town. Jake and his pal Belle 14-056 were allowed to roam the 80 acres and lived in the house with other small dogs.

Jake arrived here with Belle and had no problems meeting my dogs and cats. Jake was unknown about cats , so that was great.  Jake was a bit nervous for the first couple days. That is pretty normal. He paced, panted and drank lots of water.  Jake really likes to be near his people and usually stays pretty close by. I gave Jake free roam of the house from the first day and have not had any problems.  He sleeps on the floor in the bedroom at night. Jake will bark or whine if he needs to go outside.

Jake walks very good on a leash. He met my neighbors and their dogs with no problems. Jake does get tired after a couple miles so he is a bit out of shape. With continued exersize and reduced food he should shape up in a few weeks. The vet didn't give a exact number but said that Jake could stand to loose at least 10 lbs.

Jake is listed for Kids over 10 years old only because when he gets excited he could easily knock smaller kids over. Jake gets very excited when I come home or when other people come over. He does a silly thing that he has to have a toy or bone in his mouth then wiggles and whines/cries and bounces.  Jake has always had other dogs around him, so it is unknown how he would be as a only dog.

Jake is listed as fence not required because he  has good recall. To me, a fenced area is always a good idea but I do understand it is not always practical or sometimes not allowed. I doubt that Jake was ever trained for invisible fence. 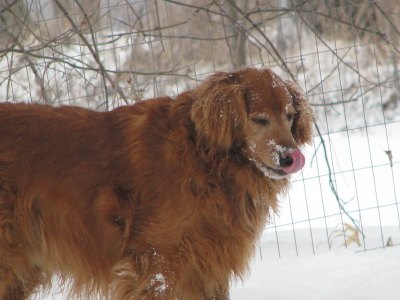 Jake seems to only know the command to "Sit". He could use a little more work on that and to be taught some other basics. He seems eager to learn and is food motivated. More commands would be helpful when he gets so excited to re-direct him.

Jake acts young for his age. I have a 6-7 month old Chocolate Lab puppy here that Jake likes to wrestle with. Of coarse the puppy is relentless and a couple of times Jake had to let her know to knock it off, but didn't hurt her.

Jake will be going to a groomer this weekend hopefully so He should be less shaggy for his next update. 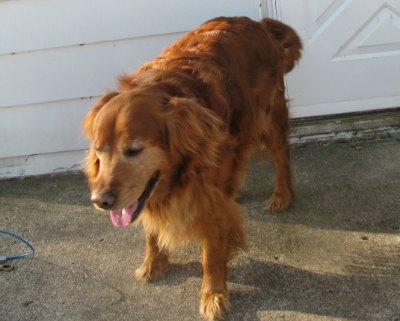 Does Jake 14-055 sound like the dog for you? Contact your placement adviser to set up a meeting to find out.
Sponsor Jake