June was one of five puppies rescued by a good Samaritan. Her mother was a Yellow Lab and dad was a Golden Retriever. All the puppies are black with just a little touch of white on the chest and feet. June has a beautiful coat and you can tell by the wavy hair on her ears that as an adult she will most likely look like a Flat-Coated Retriever. She has the narrow, English-breed style head with the pointed nose. She's going to be a beautiful dog. She is already beginning to get feathers on her rear haunches.

June is the smallest of the puppies in the litter; she weighs in at just over ten pounds. Even if she is not golden in color there is absolutely no doubt about her having a Golden personality. She loves to play with toys but she has to be in the room where her people are. And if she's not in physical contact with her people she has to come over to touch, lean or otherwise get attention every few moments. About half the time she'll want to climb into your lap. She's easy to take for a walk because she won't go more than about four feet from you as you walk around the yard. And if you sit on the grass you've got June all over you.

Most of the time when June is outside her little nose is on the ground. It's quite the sight. But it's also difficult to get good pictures because if she looks up she's immediately running back toward you. We have gotten more than a few puppy nose prints on the camera lens. She shows interest in chasing a ball and loves to chew on the Elk horn that we bought for our resident Golden. She will even share it with her sister but she is more assertive than her sister is. They'll both begin chewing, one on each end of the horn, but June chews toward her sister's end until poor April drops off. 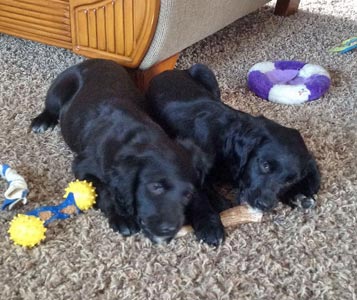 This morning she woke us up with some barking. She wanted to go outside to go "potty". Her area was clean with no overnight accidents. She seems to be getting the idea about housetraining. Pretty impressive for a such little girl.

We have our three-year-old granddaughter for the weekend and the puppies just love her. They follow her ... well, like little puppy dogs. They'll play a little tug-of-war and they'll lay on the floor with her. They also give her puppy kisses. Then everyone gets tired and they all have to go and have a nap. But not together.

June will respond positively to obedience training and is going to be a wonderful addition to someone's family. Make contact with your placement advisor now ... she won't last long! 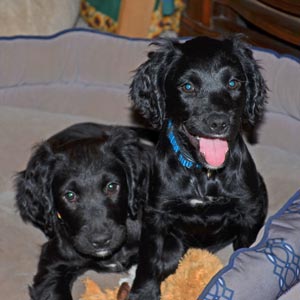 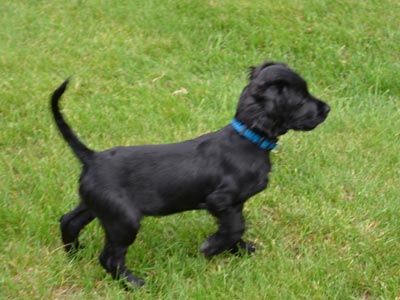