Happy Valentine's Day to one of the most handsome boys in the world! Love, Nikki 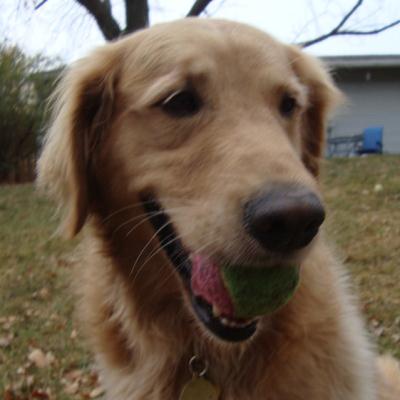 Let me introduce you to a very handsome guy named Murphy. Murphy is a purebred Golden Retriever and he will be 5 years old in December. Murphy was surrendered by his owner after a bite to another dog and after he tore a visitor's pants. Thankfully Murphy's vet convinced the surrendering owner to turn him over to RAGOM to work with these issues. Thank You to Murphy's Dad and the staff at his vet clinic (special mention to Nancy) for bringing this handsome guy to RAGOM!

Murphy is a rescue dog. He may not be perfect for every home. While he is in foster care his new Foster Dad and resident dogs will help Murphy to learn a few things. One of the first things that we have learned about Murphy is his intense love for toys. He loves to play with almost any toy. While Murphy will share with Foster Dad he is not so sharing with the resident dogs. So we are working with Murphy to learn that there are plenty of toys for all and if he plays nicely he gets treats and praises and hugs. When he gets protective of a toy from the other dogs we trade and put the toy away. So far there have only been two minor issues over a toy, one was a tennis ball and the other was a soft throw toy.

Murphy was said to have high energy. No problem with that. Murphy is enrolled in a physical exercise program aka doggie boot camp (like our last foster Shadow 12-280). This entails walks in the morning and the evening if the weather is permitting. He is getting used to a Gentle Leader. When I picked Murphy up on Saturday afternoon I quickly learned how strong this 70 pound dog was. He pulled 3 times stronger than Shadow ever did. Now after just a few short days Murphy has gotten the hang of walking nicely in between Indy and Lauren (resident dogs). The trick is to not let Murphy have much slack in his leash or he will likely try to rub his snout on the grass to try and slip out of the Gentle Leader.

Murphy's forever home should have:

Check back for further updates on Murphy! 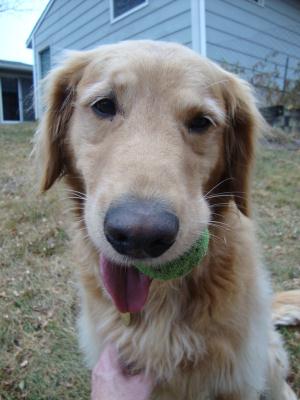