Shawnee arrived last night from Superior, WI. He's a big, handsome older guy. He is supposedly 13 1/2 years old, but is really active for a dog of that age--he acts like he's about 6! He weights 76 lbs, and he's a tall guy with a gorgeous coat. Some of his history is a little sketchy, but it seems he lived with one owner for 12 years, where he lived outside and was allowed to roam. Original owner gave him up when he realized that Shawnee needed another dog around. He went to a new home for a few month, where he lived with other dogs and a child, but when the new owner was moving to a place that didn't allow dogs, he was surrendered to RAGOM. He arrived last night, was a little anxious (understandably) and so far, has done great with the resident dog. The resident cat has had to teach him a lesson or two, but they seem to be doing fine. He went to the vet today to get updated on his shots and have some blood work done, is going to the groomer tomorrow  and will be neutered on Saturday . He's got a whole new life going on! 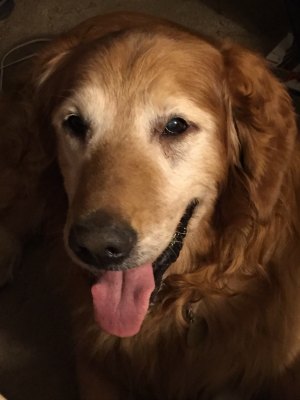