This cute golden mix girl came all the way from Alabama. She arrived in a huge transport van that was filled with dogs. I was there when unloading all of the dogs. When it was Auburn's time to come out of the kennel,  she was so scared and wouldn't walk on the leash, so I had to carry her to my vehicle. When we arrived home, I had to carry her into the house. She would stay low to the floor. As soon as she saw the resident dogs she lit up and started mingling with them.

We have no history on Auburn, all we know is that she was dropped off at the shelter down there. I believe Auburn wasn't her name, as she doesn't respond to it. I also believe she hasn't been properly socialized to humans. As of now, dogs are more her friends than humans. The first few days I had to attach a long tether when going outside otherwise she wouldn't come back in. She definitely takes the cues from the resident dogs when going outside and coming back in. Auburn is skittish around the house and will  go into a submissive position when approaching her. She has been here in the home for 2 weeks now, and she has started approaching me for attention at my desk.

At her wellness check she weighed in at 34 lbs. The vet estimated her age at 7-10 months. Right now we are treating her for hookworms and ear infections. Later this week she will be spayed. While in Alabama, she was brought up to date on her shots. While looking over her vet papers from Alabama, she also had fleas and ear mites when dropped off at the shelter. Here at our house, she has been itching and biting her skin. At our vet, the doctor didn't find any fleas and couldn't explain why she would be doing this. I thought it was cute while at the vet, she kept going back to the mirror to look at herself (see picture below.) 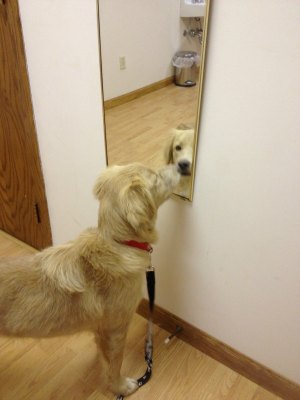 Auburn is such a sweet little thing, she's just so innocent looking. When you approach and talk to her in the right way, she'll wag her tail and wiggle. We crate her when at work and night, as she isn't fully potty trained. We always feed her in the crate so it isn't such a scary thing to be in there. Once she's in the crate, she is the quietest thing. She has to be the only foster dog we've had, that hasn't barked while being in there, maybe a little whining. 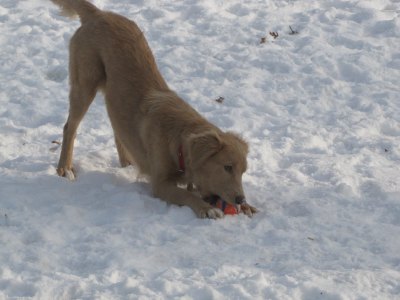 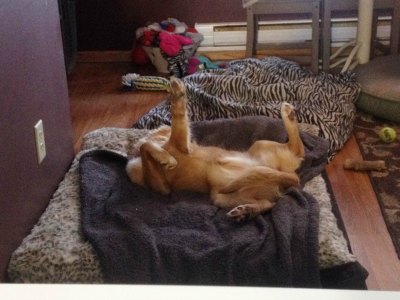 Auburn needs to be in a home with another dog to help show her the ropes. Her adoptive home will need to socialize her to new experiences to help build her confidence.