Snuggly. Soft. Playful. Intelligent. Sweet. Words that come to mind when I try to describe Griffin, a 9 week old Goldendoodle puppy. Griffin and his sister, Gabby 16-005 came to rescue from a breeder. He looks a great deal like a Golden Retriever in his coloring but has some lighter areas, the start of a Doodle beard and a cute docked tail. He has a lovely personality. He’s quiet and watchful in new situations, like his visit to the vet. At home, he’s very playful by himself with toys. With my big dogs, he’s chasing or playing tug of war. He loves the snow. He runs through drifts, digs little holes, climbs to the top of snow piles and pushes snow around, playfully chasing snow balls. He is very much Golden but has some Doodle moves as he plays. 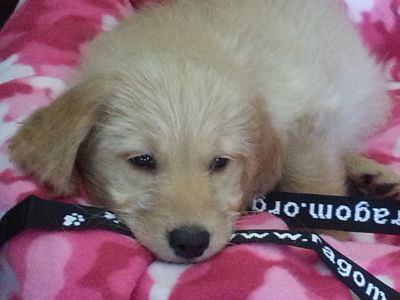 Griff is a quick learner and is working hard on his housebreaking. He is making progress even with some very awful weather outside. He has slept in bed with me with no accidents. We get up once during the night for my other dog to chase rabbits and Griffin to take a potty break. 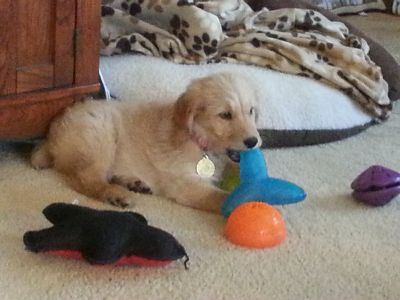 Griffin visited the vet for a checkup and update on his puppy shots. He weighed 11.8 pounds and was reported to be in good health. Griffin will be neutered before he is adopted. 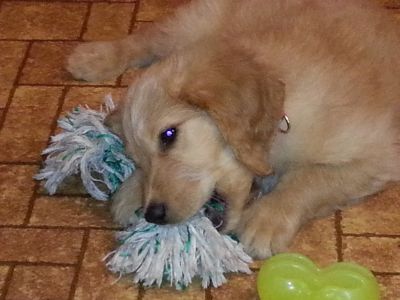 Anyone interested in adopting Griffin should contact their placement advisor.   Potential adopters should be familiar with the needs of a young puppy and the amount of time, patience and commitment raising a puppy requires.   As a pup, he will need someone home to continue his housetraining or with a flexible schedule to be home to let him out after a few hours. He is smart and not a very mouthy pup. He has the Golden desire to please and will be a lovely companion dog.