Please welcome Mr. Jack to RAGOM --- all 135 lbs of him!  Yep, you read that right. One.  Three.  Five.  This special boy was whiling away his days in an outdoor dog run when fate knocked on his door.  His family, who he had been with since he was a puppy, was moving and Jack would have to move too.  Lucky for him, instead of being surrendered to a shelter he became a RAGOM boy!  While he hasn’t been fully vetted yet, he did get his initial round of shots, some medicine to help his painful ears feel better, a possible explanation for his excessive weight (thyroid), and a lot of loving from the vet techs who stayed after work on a Saturday to help us out.  Then it was off to the old homestead where he met the resident pack, with tentative, but friendly, tail wags.

This fur-kid is a gentle giant!  He clearly loves kids and didn’t even turn his head when the cat ran by (as you can see on this video http://youtu.be/zC3oPzkROX0 ).  I am surprised at how well he moves despite his size, and he is perking up even further as he gets more comfortable here.  He did refuse to eat the first night, but since he is in no danger of starving, not really a problem… When he arrived, he had tufts of hair sticking out all over, and a thatch of old fur next to his skin.  He looks so much nicer just with the surface globs of hair removed, and even better than the handsome picture he presents, Jack loves to be brushed!  He gets the wiggles he is so excited (which is a treat to see with a boy that big)!  He also has tremendous mats holding his ears down, but we are going to let him chill out for a while and work on his ear infections before we tackle those. So far no accidents in the house despite being an outdoor dog – he is willing to squat right away when he goes outside, and he pees like a girl!  Yay!  I love a guy in touch with his feminine side!

Jack definitely prefers me to my husband if we are messing with him, but he is happy to lay outside by FD’s feet all day.  He doesn’t like crazy Clyde, the resident dog, in his face (who does, right?), and will give him a lip raise to let him know to back off, but does not object to being in the same area as long as Clyde isn’t popping his bubble. I would guess he doesn’t have much experience outside his run -- meeting new people, and going new places – so he is tentative with strangers and new situations, but he will learn that people are good!

And who better to set the perfect example for him than Barb and Ken who stepped up with a sponsorship for this awesome pup before his transport was even complete!  Watch out you two. You have a huge hunk of burning puppy love who can’t wait to thank you in his own signature, slobbery style!  Thanks for giving him a push toward the good life! 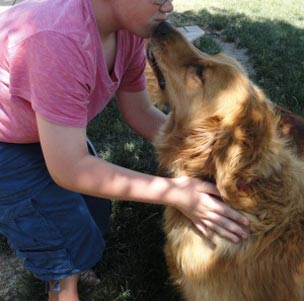 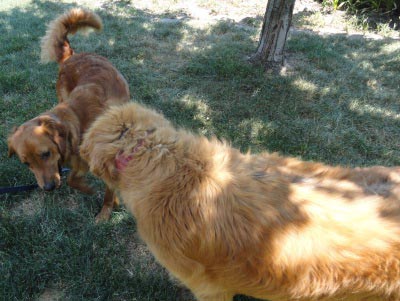