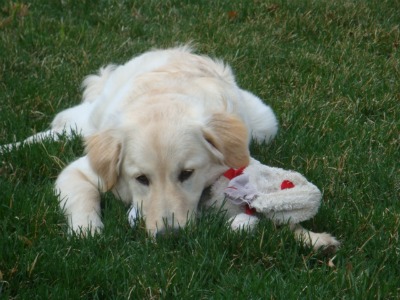 Amadea aka “Dea” came to stay with me on St. Patrick’s Day all the way from North Dakota. I guess that was my luck of the Irish.

Dea is an 8 month old Golden mix, who as you can see, looks 100% Golden. She has a 100% Golden personality and is very sweet. She’s currently sleeping on the floor of my office behind by chair.

She came to RAGOM through one of our adopters. The adopter saw a sign advertising her and responded to her original owners. The adopter took her with the understanding that she was going to be surrendered to RAGOM. Dea was found on a construction site when she was a couple of months old and was taken home. Her original owners kept her until she became too large for their small apartment. Dea is very friendly and loves to give kisses. Even though she’s not as high energy as some of the other dogs I’ve fostered, she does have typical puppy energy and needs lots of exercise. Dea loves to go on walks but pulls some with just a regular collar. She hated the gentle leader at first and fought it for about 3 ½ blocks. After that, she accepted it and hasn’t had a problem with it since. Now when she sees it and the leash she knows it’s walk time.

My 12 year old grand-daughter was with me when Dea was picked up. Dea LOVED her and spent about ¾ of the ride back with her head and other parts of her body on my grand-daughter’s lap. However, Dea does jump when greeting you so she might be a little too exuberant for small children.

Dea loves to ride in the car and after you establish that she really can’t ride shotgun, she either lies down or sits and looks out the window.

Dea is totally house broken and we have not had one accident since she’s been here. She had free roam of the house and does pretty good but being a puppy, she will chew on inappropriate items, like shoes, if they are left out. Dea also barks. Mostly when she is outside and it is a greeting/play bark. We are working on this but it’s a work in progress. She loves the outside and really enjoys our fenced yard. She thinks that the birds are there for her to chase.

We had our first thunderstorm today and other than looking around to see where that noise came from, the thunder didn’t bother her at all so I don’t think she has any storm anxiety. Dea has no recall and at times doesn’t appear to know her name. I tried all variations of her name with no success so I settled on Dea. While Dea will let you take anything from her, when she’s outside, she thinks it’s a game and will run away and try and get you to play. Inside, we don’t have this issue.

I currently do not have a resident dog and Dea is constantly trying to get the dog next door to play through the fence. The adopter who surrendered Dea to us had 3 Golden’s of her own and I think Dea is missing her playmates.

What I believe Dea needs from her furever family is someone who understands puppy behavior, is dog experienced and is committed to taking her to obedience training to help correct any issues she may have. She will need someone to continue to work with her on her barking issues through positive reinforcement so it is no longer an issue. Someone with a dog already in their home or regular play dates with neighbors or friends would really be good for Dea. It would help with her energy level and help her learn the ropes so she can have a truly Golden life.

She would do best with a physical fence because of chasing the birds (and I’m sure any rabbits or squirrels if they ventured into the yard.) She may do alright with an invisible fence but she may blow right through it if she saw something that she really wanted. Because of this, I’m not sure how she’d do with cats. I believe if they ran, she would chase them. I also believe that she would do best with a family that would have someone around most of the day. It appears that most of her less than stellar behaviors occur when she is bored. She’s never been in a crate and I haven’t tried her in one so I’m not sure how she’d do being crated.

Dea has her vet appointment on Wednesday and a date will be set for her spay at that time. Once she’s released by the vet, she’ll be ready to go to her furever home. Is it with you?