Apollo is happy to be a RAGOM boy & is he sweet! He is celebrating his first birthday today! He has been with us for three weeks. My husband says he barks of a beagle, looks like a lab, and loves like a golden! He does the Golden lean-in & paw to get attention. He has the cutest little speckled paws. Apollo came to RAGOM with his brother Alec 14-130, sister Skye 14-129, and his mother Marilyn 14-134.

Apollo was seen by the vet on May 12th . He was brought up to date on all of his immunizations.  (He’ll need a booster in the next week.) He was negative for heartworm and parasites. He has started on HW preventative. He was microchipped. He did have a bladder infection and has been on an antibiotic for the past two weeks. He went back today for a urinalysis recheck to make sure it’s cleared. Apollo was neutered on May 14th healthy, active dog. 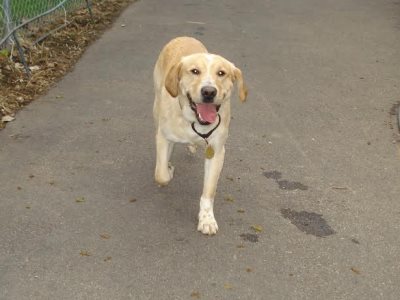 Apollo was a bit skinny when he arrived at our house. He is eating well and weighs just over 50 pounds now. He has had two baths and we have clipped his nails. He was relaxed for both. He's very trusting & wants to be friends with all the 2 legged and 4 legged varieties. He is 99.9% house trained. The few accidents he’s had, I did not read the loud signal that he was standing by the door. He sleeps in a kennel by the end of our bed at night and waits to go outside until we are ready. Although, there have been 3 nights were he’s whined in the night and we took him outside, then right back to his kennel for a couple more hours of sleep. 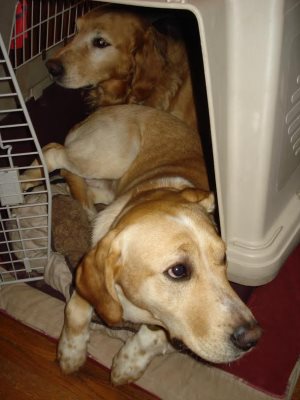 Apollo loves to play! He chews bones, balls, and Kongs. He has not chewed anything he shouldn’t. We had a previous foster about his age visit for a long weekend. He’s about 30 pounds bigger than Apollo, but that didn’t slow Apollo down. They played for hours and cuddled up together to rest. He does pull on walks, but is now doing very well when we use the gentle leader. He is startled by new noises and objects as he may not have been exposed to a lot at his previous home. When this happens he usually pauses and assesses the situation. When he knows everything is ok he goes on with whatever he was doing. 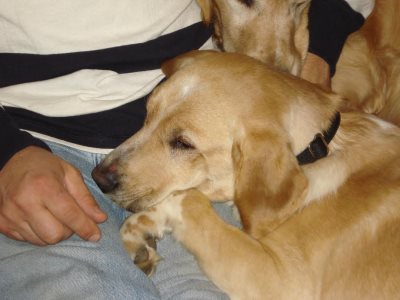 His forever family should be willing to take him to obedience training. Apollo loves to play, cuddle, and explore all that this new world has to offer. If you are interested in learning more about Apollo please let your placement advisor know.