I would like everyone to meet Miss Bailey! She is a 6-year-old purebred Golden Retriever, born February 1st, 2009. She was lovingly surrendered by her family when they realized they just didn’t have enough time to give her the attention she deserves. Bailey was previously an outdoor dog, sleeping in the garage at night, so she is adjusting to living indoors! She has already discovered the comforts of dog beds and the furniture. Bailey went to the vet and is heartworm negative, up-to-date on her vaccines, and is already spayed. She is just getting over her first ear infection, so we are keeping an eye on it to make sure it doesn’t flare up again. Bailey does have some arthritis in her hips and is taking a daily pain med to keep her comfortable. She does weigh about 90 pounds and needs to lose about 10 pounds. Once she loses the extra weight, it will be much easier on her hips and they should be reevaluted. We haven’t noticed her hips actually bothering her at all, really, but she does take stairs a little slowly. Bailey was shaved prior to coming into RAGOM, but her coat is starting to grow back out a bit. Bailey has plenty of energy and loves her daily walks - we go every day and have gone almost 2 miles straight with her so far. She does pull some and is very strong, so we use the Easy Walk harness and she does great. Bailey loves balls and is great at playing fetch! She is doing great with our 2-year-old resident, Leinie, and keeps up with him pretty well running around the yard! The other night, they both had the zoomies and Bailey was trying to catch Leinie - she couldn’t quite get him and was so adorable, barking at him as she ran, trying to get him to stop!

Bailey has the typical Golden personality - she is a Velcro dog and definitely has the Golden nudge down! She loves sitting down, leaning up against us and getting petted. She loves to lie down and roll over waiting for a belly rub, too! I don’t think her tail has stopped wagging since she got here. Bailey does have some manners to learn - she has picked up flip flops and blankets, but so far hasn’t actually chewed up anything that she shouldn’t. She also shamelessly counter-surfs whenever she thinks there is something up there she is curious about. Yesterday, she stole a couple of bananas off the counter and proceeded to run around the house with them while Leinie chased her trying to get them! She does trade nicely and doesn’t resource-guard anything, so the bananas were pretty easily retrieved once we caught her (picture below)! She also does like to shred up the soft toys, so she is now limited to Kongs and antlers, which she thinks are great fun. 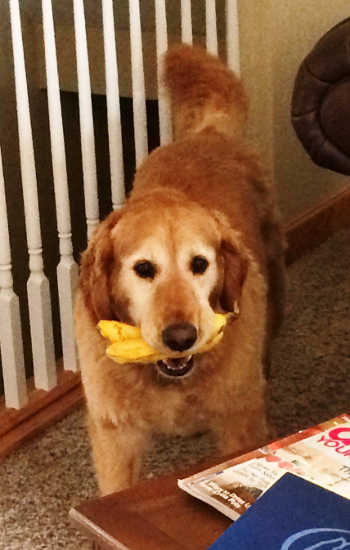 We are working on potty-training Bailey; she has only had one accident so far, so she is doing pretty well! She doesn’t go to the door when she needs out, but she does get restless and starts wandering, so we take that as her signal that she needs to go. Bailey does just fine being crated for a full workday and at night with no accidents also. She isn’t a huge fan of going into the crate, but once she is in, she just lays down and takes a nap. Bailey knows some basic commands, but is selective about when she wants to follow them.

Bailey’s main requirement for her forever home is plenty of love and attention! She could live with kids of pretty much any age as long as they understand not to hang on her as it could hurt her hips. She does get excited and will jump up, but she doesn’t actually put her paws up on you; she just lifts them up off the ground and hops and wiggles around. She could live with or without another dog. We have not cat-tested Bailey, but she has a pretty high prey drive, so I would guess she may not be great with cats. A fenced-in yard is preferred; she has okay recall, but does have a stubborn streak and chooses to come back only when she wants to! If you are interested in this sweet girl, please let your placement advisor know. 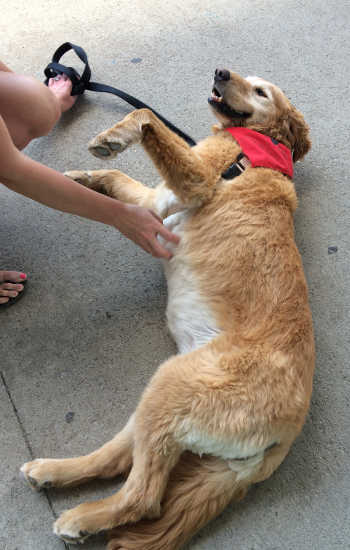 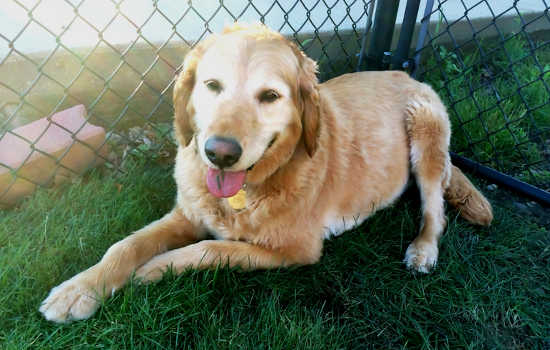