Who wants a puppy who is housebroken, neutered, heartworm negative, up to date on all his vaccinations and loves to have fun??????  If so, Barney is your guy!  He is actually 2 1/2 years old, but in a golden's life, that is a puppy!

Barney loves life and is a joy to have around.  He had been living with a family and two dogs.  Then the elderly mother-in-law and her 10 year old poodle moved in.....so Barney had to leave.  He'd been in an overcrowded shelter for over 2 weeks until we picked him up 5 days ago. He's used to being around kids, other dogs and cats.

He's been great with our 3 goldens and every dog he meets on our walks  He's very curious about our elderly cat but hasn't chased her.  He was walking like a drunken sailor at first but we're using the gentle leader and now he's walking great.  He knows several commands and comes immediately when called.  He went to the vet today and is completely healthy weighing in at 57 pounds.  He is a medium golden with a pink nose and lips and the most unusual, beautiful eyes you've ever seen.  Everyone he meets comments on his eyes.  He's completely housebroken and willingly goes in his crate.  He loves any type of toy.  He only barks when he's playing with the other dogs.  He can really jump high but never jumps on people.

Just can't say enough good things about this boy.  He is young so will need to go to a family who can spend time with him and give him lots of exercise. He would love to have another pup or some kids to play with.  Please contact your placement advisor if you're interested in Barney. 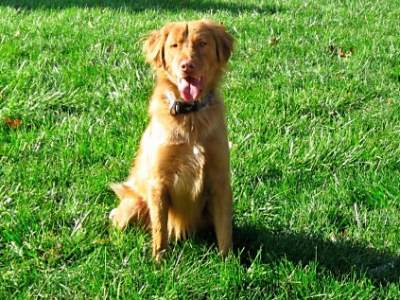 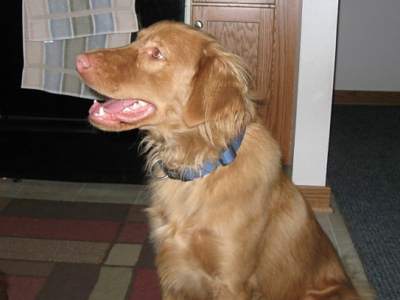 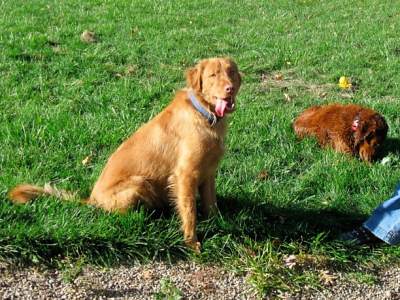