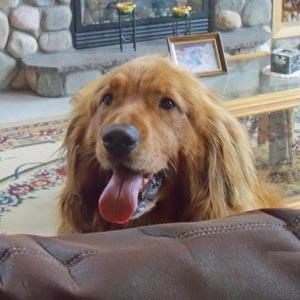 Meet big, fluffy, beautiful Bear!! He is a male, neutered, Dark Golden mixed with something. I think maybe Newfie, he has that kind of hair and Huge paws to go along with it. He is around 3.5 to 4 years old. Bear was found as a stray so not much is known about him, but I can tell you what I know after having him 3 days and of course as the days go by we will update you.

The first picture you see at the top of him laying on the couch was taken right after he got into my home and this is where he has made himself comfortable, he has yet to lay anywhere else, not even on the cool floor, he chooses the couch. You can see from this picture he is a big fluff ball and nothing but hair! He was very stinky so we went to the groomer the next day and got a bath, some matts shaved and cut a little. So as you will see at the bottom of the page (him standing on couch) this is him after his groom and he is feeling pretty good and looking great!!

Bear is all up to date on everything, he is on medication for his ears. Other than that good to go. He rides excellent in the car, he had about a 7.5 hour drive to me and 5 different vehicles to ride in and did great in all of them. He met a couple dogs and cat at the groomers and vet and could have cared less they were there. He is house trained, no accidents but does not go to the door to go out as of yet. He walks good on leash, have yet to hear him bark, even when someone comes to the door. He does not know how to play with toys or what they are even for, but of course we are working on that.

His first couple nights went well, but he chooses to sleep on the couch instead of my bedroom and dog bed. I left my bedroom door open for him and he kept coming in the first night to check to make sure I was still there, but then went to the couch and stayed there. The 2nd night he followed me in the bedroom, but then as soon as lights out he went to his favorite spot, the couch! I could tell when he first came inside the house he had not been in a house before, he was fascinated with the TV. He is very jumpy when it comes to quick movements and noises, but is relaxing more as the days go by. He also is almost afraid to eat, he looks at me like he is going to get in trouble if he takes a bite, not sure why, what he has gone through but the first day did not eat at all , which of course is normal with being stressed from the move and new place and all. The next day I went and sat by the bowl and encouraged him it was ok and he started to eat and then would run off, I kept calling him back and hand feeding him, then just petted him telling him it was ok that it was his and no one was going to take it away. He then settled down and started to eat. If only he could tell me what he is thinking!

One funny thing he does, is come up from behind you and go between your legs and then just sits there waiting to be petted. He does this often and it is so cute. I will get a picture of this next time. That is all for now!! 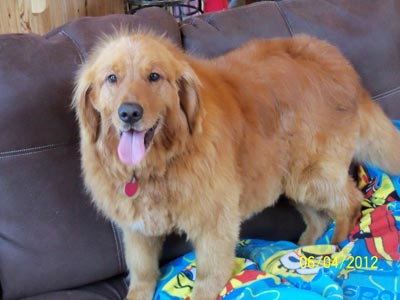