I’d like to introduce Bentley, a handsome 2-year-old Golden Retriever. He is a lighter blond color and a big boy—about 85 lbs. He is neutered and UTD on all his vaccinations and preventatives. He has his well-vet check in a couple of days so I’ll report back his actual weight and any other results.

Bentley was surrendered by a couple who work long hours, and they felt they were just not giving him the time and attention he deserves. This was heartbreaking decision for them, and you can really see the excellent foundation they gave him. He sits beautifully on command, loves his walks, and he is a happy boy. Bentley needs some work with his manners, but he is so eager to please. He LOVES it when I work with him –he lights up and is 100% engaged when we practice “sit and stay” or “leave it,” and other commands. 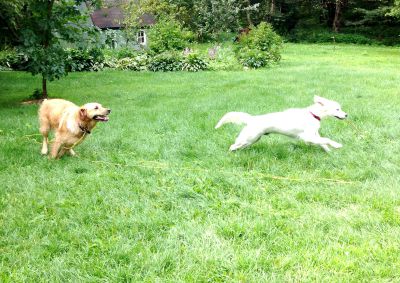 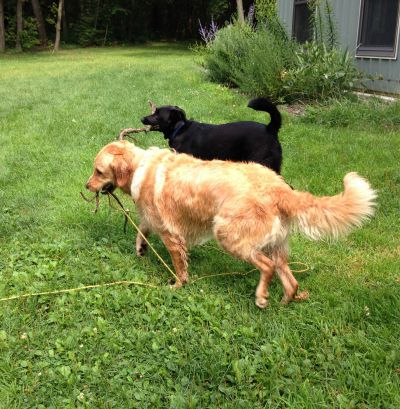 He gave me a little scare the second morning he was here. I took him out to go morning potty—we don’t have a fence so I had him on a leash. A rabbit darted across the driveway and Mikey (resident dog) ran after it, and Bentley jerked so hard the clasp on his collar came undone. So I used my happy voice (masking the “oh crap” voice inside) and called for Mikey and Bentley to come. They both came back right away –thankfully! And I tossed the collar and put a different one on him.

Bentley’s one true love is water. I have never seen a dog love swimming as much as he does. On one of our first walks I had him on an expandable leash so he could relax and take in all the country smells. This was right after it rained buckets and there was about 3 feet of water in one of the ditches. He dove in and dunked his head under the water and rolled around—it was hilarious. He couldn’t get enough. Early this morning I took the dogs to the lake for a little swim before it gets so hot out. He was in heaven swimming and was amazing at retrieving a stick. He is completely at home in the water. When we got back home he settled right down and took a nice long nap :-). 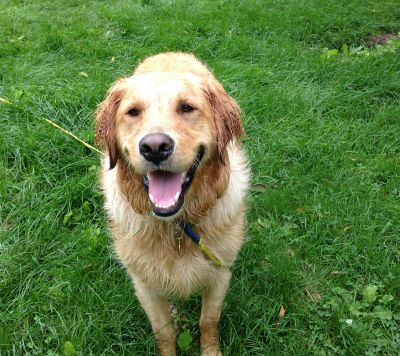 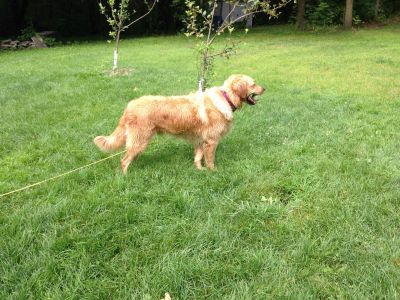 Here are some other observations: I haven’t seen any resource guarding around toys or food. He plays well with my dogs, and has a nicely paced play style—lots of chase, “catch me” when he has a toy, and “bity.” He loves squeaky tennis balls and will walk around with one in his mouth. He also loves to chew –Nyla bones, shank bones, and raw hides. He gets along fine with the cat. He had never been around cats before and was super curious when he first got here, but he and the cat quickly got on the same page. Now the cat seeks him out to play and will lay next to him and bat at his tail. For walking, there is some pulling with a flat collar and leash. I introduced him to a Gentle Leader and that works wonders—he walks beautifully with that. He loves any and all exercise. 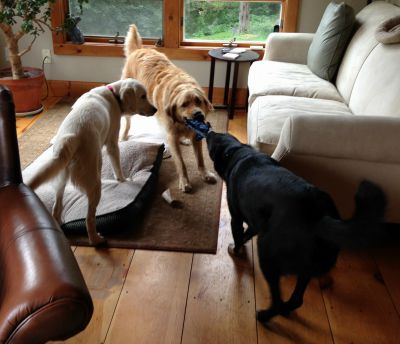 He had a couple of accidents the first day he was here, and I am going to attribute that to my not reading his cues and not keeping him tethered to me like I usually do. I’ve kept a closer eye on him since, and I’ve taken him out for more potty breaks and he hasn’t had any accidents since. I’ve been crating him at night and during the day when I need to work (I work from home). I’m starting to transition him to free roam and he’s been doing great. He rides really well in the car. He likes meeting new people although he needs to polish up his manners so he doesn’t force himself into their space. The surrendering owner said he’s interacted with kids 6 years old and up and did great, however he hasn’t been around younger ones. I’ll scope that out and report back in an upcoming update.

Bentley has an independent side yet he looks to the resident dogs for modeling. He is very social by nature, and I think coming from a place where he was alone so much of the time, it would be wonderful to find a home with another dog for the companionship. He will also thrive in a home with a family that has lots of time to spend with him and work with him—to bring out the best he can be. He is a gem!