Let me introduce Bindi. She is a pretty Golden-Doodle who was surrendered to RAGOM by her owner when medical issues left her no longer able to care for her pets. It is obvious that she was well-loved, and we thank her owner for making the tough decision to give her up. She is a super-friendly girl who seems to just love attention from people; we will be able to find a wonderful home for her.

Bindi held up pretty well through what must have been a terribly confusing whirlwind of changes on her way to our house, where we plan to foster her until she is adopted. She slept her last night at her former home, then a night at the transporter’s home, then one night at a temporary RAGOM foster home, and then finally arrived at our home on the fourth evening. I would never judge a dog’s behavior after going through so many rapid changes, but I will say that she did very well. Except for growling some at our little Shih Tzu, who can be a very in-your-face dog, she did well. She met our very enthusiast Golden with no issues and was very friendly with us, the two adults in the home.

In the time she has been with us, she has not gotten into any trouble – no counter-surfing, no inappropriate chewing, no potty accidents. It has stayed a little ‘iffy’ with our small dog, and for that reason she is crated at night and if all the people are gone. I work from home, so she has not been alone very much at all. She accepted the crate very readily and, in fact, is sleeping there as I write this. We leave the crate door open during the day and she goes in there for naps very often. I think she would be a dog to earn free-roam very quickly, once she is settled with a family.

Bindi is pretty quick to bark when our neighbors dog is outside, but she is wonderful about coming right back in when we call her, so it has not been a problem. She is very responsive to her name.

The information we got from her incoming bio is that she is good with kids, cats and other dogs. We have not tested her with kids and cats, and she is fine with our resident Golden. We were very watchful with her and our Shih Tzu the first few days, because she did continue to growl at him off and on. Some of that we put onto him, as he will get pretty barky at other dogs, especially in close quarters. It seemed like things were relaxing with them, but this morning when all three dogs went out into the fenced backyard, our two residents took off at a run to the back corner of the yard, and Bindi took off after Benny. It was very clear to me that she was focused entirely on him and I called out her name and chased after them. She caught him way before I could catch up. She clearly was not in a full attack mode, as little Benny would not have come out of that very well, if at all. But it was also clearly not playful. We have moved Benny to our daughter’s house for the time being. That being said, I cannot at this time say that Bindi is ok with small dogs. She has been through a lot of change, and we have only had her at our home for less than six full days at this writing, so I certainly don’t want to give her a black mark at this point. However, with just the little we know about her so far, I would be cautious adopting her to a family with a small dog, or to a family that has no fence but has small dog neighbors.

Bindi went to the vet this week.

Bindi is available now for adoption, except that we won’t have results from the heartworm test until sometime next week. I think she will be a very easy addition to a family. If you are interested in meeting sweet Bindi, please contact your placement advisor. 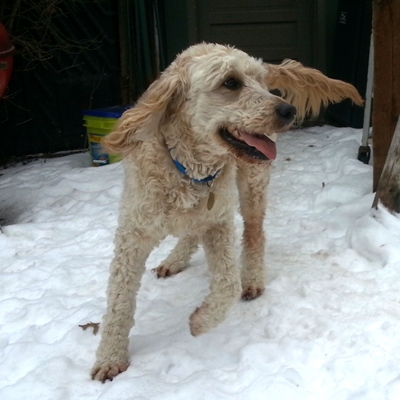 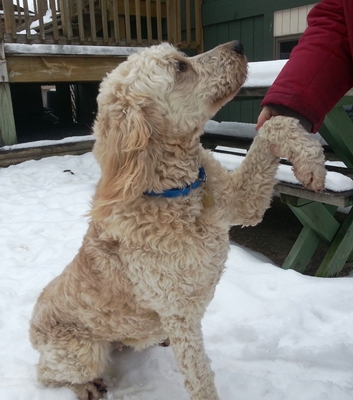