We'd like everyone to meet Boo!  (He looks more like a "Bandit" to us, but that will be for his forever family to decide.)  He is a golden mix that was dropped off at a shelter in Alabama around Halloween with his litter mates who were all given names related to the holiday.   Appears he is about 8 weeks old.

This poor little guy has been a very sick pup this week, but it is nothing time and some meds won't cure.  Thank goodness!!  Prior to getting to our house he had contracted Giardia and it ended up being a pretty bad case which included one night in the hospital.  It is amazing what one day of IV meds did for him and the different personality that is emerging as he feels better.  The second round of shots are completed and are scheduled for his rabies in about 2 weeks. Other than the upset tummy, the vet thought he was in really good shape.  One of his litter mates did have Parvo but Boo has been tested for two different strains and is negative.

Boo is all puppy - running, playing, chewing, etc.  Although he has a tendency to go for inappropriate items for his chewing preferences, he can easily be distracted with puppy toys.  Tug seems to be one of his favorite games.   He is a great eater and doesn't mind our three resident dogs while he eats.  Believe he will be a quick learner as he already tells us when he is hungry.  Am working with Boo to be gentle in taking treats and is catching on quickly.  Potty training is a work in progress and is complicated with his upset tummy.  One quirk with Boo is that he isn't very vocal when he wants to go out at night and will mess his kennel if we don't hear him move.   The trick is to leave his collar with tags on so we hear them jingle and that is our cue to take him out.  We have been pretty successful with that approach.  He sleeps about 3-4 hours a stretch at night but had a treat of 6 solid hours last night.

Though he doesn't let you know at night when he needs to go out, he is vocal during the day when he wants out of his kennel.   He has a different bark that has almost a "trill" to it and can sound more like a cat.  He definitely prefers to be with his people.   Believe he will get along great with other dogs that are interested in playing.  We have a two year old resident that is all about playing, but our older residents are not so thrilled with Boo as he doesn't take subtle hints quickly.  Have no idea on how he would do with cats.

Being a true southerner, he is not too fond of our cold weather.  This has been great for us as he has no interest in dilly dallying - just goes out for the necessities and is ready to be in the warm house.   With training, I do not believe a fence would be required for him.

Best of all, he can be an excellent snuggler!!!  If you are looking to grow with this young guy, there will be a huge reward of love and kisses!!! 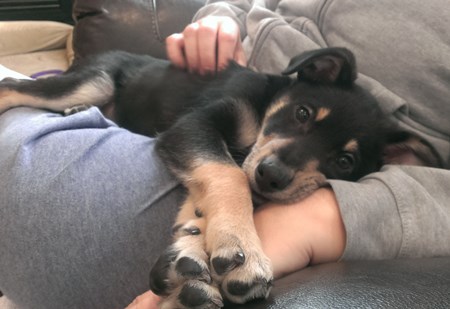 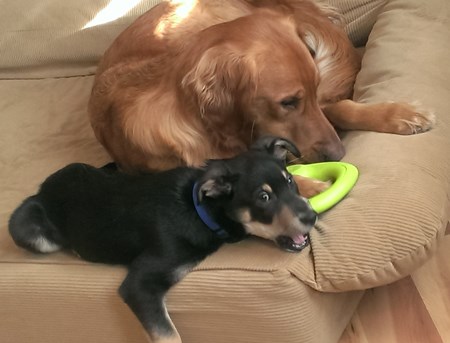 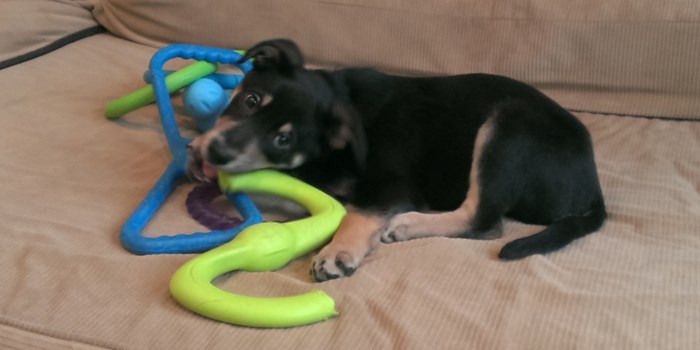