From John and Amy Borg

Let me introduce you to Boone 16-175.  Boone was sold at an auction sale on August 6 with over 450 other dogs.  Luckily Boone found his way into RAGOM’s great care and his world has been far more enjoyable.

Boone is three years old and his date of birth is 4/10/2013.  He weighs right around 80 pounds but could easily gain a few more as he is a very tall handsome young boy.  His coat is medium golden in color with white leg and tail feathering.  He was neutered on August 22 and just needs a follow up booster shot for distemper.

Boone has quickly adapted to living outside of his former commercial breeder environment.  He is still learning what doggie toys are but he does enjoy chewing on nylabones.  He walks well on a leash but does make frequent changes of which side to be on.  He rides best in a car on an empty stomach.  Two of our longer rides have made Boone carsick.

Because Boone was living in a breeding facility he will need another resident dog, a physical fence, and a home without toddlers or young children.  He is startled by sudden movements and loud noises.  Also we are still working on Boone becoming fully housetrained.  While at work Boone is crated and keeps his kennel clean all day.

If you want to support Boone and RAGOM here is his link for Goldzilla: 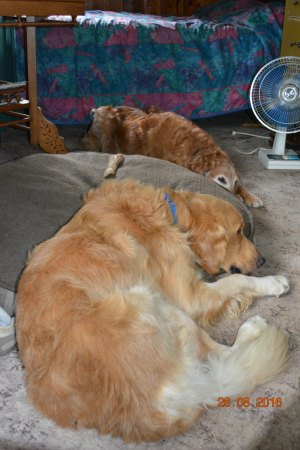