Bri is an eleven-and-a-half-year-old, spayed, female, purebred Golden Retriever. She is seventy-four pounds and is up to date on her vaccinations, heartworm and flea and tick preventives. She is microchipped. She is a retired therapy dog. She is very intelligent and eager to please. The surrendering owner (SO) stated that Bri has not been worked with a lot in the past six years. A list of commands was sent with Bri. She knows a lot of them and we are working on refreshing her memory. Bri is very good with children and coexists with the resident Golden well. Bri is an indoor dog. She has free roam of the house with no problems.

Bri moves very well for her age. She does not have a problem going up and down stairs. She has had no accidents in the house and tells you that she has to go outside by panting and walking back and forth between you and the door. She loves squeaky toys, but the SO stated that she will destroy them if she is left alone with them. We have told her to be gentle with her “baby” and so far, it is more of a slow torture than total destruction. Bri will play fetch with tennis balls, but bores after three to four throws. I do not have a fenced-in yard, therefore Bri is on a tie-out. She tolerates this very well. 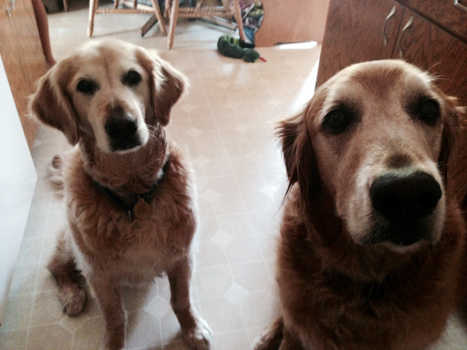 Bri (on the left) waiting patiently for a treat with the resident Golden.

Bri barks when people come to the door, but stops when you tell her, “All done.” Bri is always present when we are eating, hoping and begging for food. We are working on her manners which are improving. Bri took a sandwich that was left on a coffee table when my back was turned for two seconds.

The SO stated that Bri has a sensitive stomach. If she is given people food, she will have vomiting and/or diarrhea. When Bri first arrived, she was protective of her food and water dish. She did not like it when the resident Golden sniffed them. She raised her lip, but did not make a sound or show any other signs of aggression. This behavior ended after three to four days. Bri usually eats her food so quickly that there isn’t an opportunity for resource guarding. About two weeks after Bri came into our home, we had a gathering. Bri vomited that night and the next morning. I didn’t witness it, but assume that she had access to people food. She didn’t eat much of her food the next day. When the resident Golden came into the room, she gave a warning bark. This happened three times that day.

The SO trialed and errored with dog food. They narrowed it down to two kinds that don’t upset Bri’s sensitive stomach. Unfortunately, Bri has stinky gas and slightly loose stools as a result of her special diet. 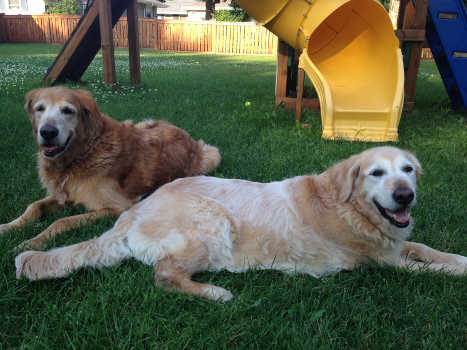 Bri (in front) relaxing outside with the resident Golden.

She has four lumps on her that the vet recommended we keep an eye on for any change. She also has two teeth with possible pulp exposure that the vet said we need to watch for possible abscess. She has some tartar on her teeth.

Bri sleeps next to my bed, on her rug that came with her. She sleeps throughout the night, but is ready to eat and go outside the second she hears me stir. She has not tried to get on my bed or any furniture. She does not counter surf. Bri will half-heartedly chase the cats, but it appears to be more for entertainment than aggression. Bri will dig if she sees something that she wants (a rabbit), but stops when you tell her to “leave it.” The SO stated that Bri is afraid of thunderstorms. We have had a few storms since she has been in our home. I have not witnessed any anxiety over the storms.

Bri likes going for walks, but does not like the Gentle Leader. Bri is usually very good when I call her to me, but will walk away if she sees that I am holding the Gentle Leader. She lets me put it on with no fight. She tugged a lot when she first came into our home, but is slowly getting better with consistent walks. There is still a lot of room for improvement with her pulling on walks.

Bri has gotten along great with the resident Golden and a family member’s Cavalier King Charles. She recently met a Pomeranian who was very snarly towards her. Bri tolerated it for a little while until the Pomeranian started moving towards her. Bri went at the Pomeranian and had him in her mouth. I told her to “leave it” and she let go immediately. There were no marks or puncture wounds on the Pomeranian. That is the only time an incident like that has happened and Bri was provoked.

Bri is a sweet, smart, senior Golden. She would make a wonderful addition to a loving home. 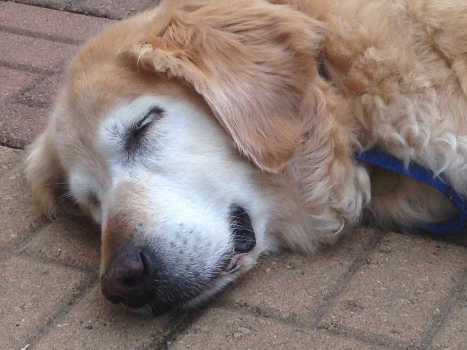