Cider came to RAGOM as a stray. He weighs 50 pounds and estimated to be 1 yr old. He is playful and friendly with people and dogs. He walks nicely on the leash. We are working on his house training. I crate him when I am not at home and keep him very close when I am home. He is smart, so I hope that it won't take too long for him to get the idea. He retrieves toys, but is not obsessed with fetching.

He was full of fleas and ticks and worms when he was picked up. For several days after being treated I was still picking ticks off of him. No flea or tick sightings in a couple of days.He has had his first dose of worm medicine. He was neutered the day before he came to my house. We tried to go without a cone, but he licked his incision too much. He is now on antibiotics and wearing a cone full time. He destroyed a No-Bite Collar, so is back to a regular plastic cone. He is very flexible and persistent, so a bit of a challenge to keep away from licking.

He tested positive for Anaplasmosis. Once his incision infection is healed, we will see about treating that. While he was at the vet we discovered that he does not like cats. He was in the back room getting his microchip inserted. I heard growling and whining and barking. I thought that he was upset about the chip. Later I learned that it was all about a cat in a kennel that he was trying to get. He loves to chase rabbits and squirrels, so may think of cats the same way.

Since he was a stray and did not know the name Bryce, I decided to rename him to Cider. He is the color of Cider and it is that time of year. I will try to get a picture of his curly tail. So far whenever I take a picture he spins to face the camera. There is some black on his tail.

He is a counter surfer, so food must be place out of his reach. He LOVES food and treats! He likes to play with toys. I tried once to leave him uncrated when I left the house. While I was gone he had pulled some books off a shelf and chewed on them. He needs to be kept busy or contained when he is alone. 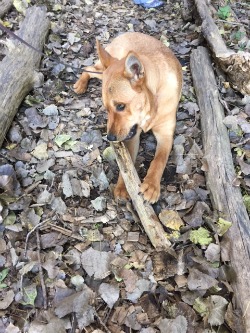 I think that he will train easily. He is food motivated and also likes praise. He is on the smaller side, and if he is a year old will probably not get much bigger. He is a happy, friendly, affectionate guy who will make a great family member.