Buddy was originally brought into RAGOM as an unclaimed stray. He couldn’t have been a stray too long because he looks to his people for guidance. Unfortunately, Buddy was stuck in boarding until a foster became available. Lucky for us we were able to spring him after we found a new home for our last foster. Before I forget, I want to send a big Thank You to the staff at Stone Mountain Pet Lodge for taking such good care of him. I know it was bittersweet to see him leave, since you became attached to this cute little wiggle butt.

Buddy is a golden mix, weighing 34 pounds, neutered, and up to date. I am guessing he might be part Beagle or Hound. He is the size of a Beagle, with long ears and sniffs the ground on walks and in the yard like a Beagle or Hound would do. He has the coat color of a Golden Retriever and from the side he looks like a mini Golden. One thing is for sure, Buddy is a P-U-P-P-Y and 100% adorable. The pictures do not do him justice. We thought he looked like an old man in his photos, but in person he is a happy little pup. My husband and I couldn’t believe how little he was! He also sheds far less that our resident Golden. He is super soft with velvety ears.

Mr. Buddy could probably stand to gain a few pounds. He currently is happy to be kenneled during the day and has had no accidents. He is estimated to be 9 months to 2 years of age, so we can split the difference and say he is a 1 year old. He is super food motivated, so he should be easy to train. He knows how to sit. Last night I took the treat pouch on our walk and I was able to consistently get his attention and get him to sit for a treat even while distracted. We had barking dogs, police sirens and traffic, but he would sit, look up at me, and wait for his treat. We feel he would excel in obedience classes.

Buddy’s first foster had a cat which Buddy was way too interested in, so we will say no Kitty Cats for Buddy. Buddy was too much of an energetic puppy with the second foster’s dog and wanted to play too much for their dog. I did ask how Buddy was with the other dogs at Stone Mountain boarding and they said he did great. He is a puppy, so sometimes he will do inappropriate things, but he needs to have some canine correction to learn what is appropriate. We would suggest taking him to doggy daycare a few times to keep socializing him. Buddy tried mounting our resident dog Ally which she corrected. Buddy listens well to her and has responded appropriately to her cues. Ally is teaching Buddy some doggy manners! J

As mentioned above Buddy is a puppy, so he will need a puppy proof home. We have not trusted him with free roam yet even while we are home. He has a history of counter surfing so we keep the kitchen gated off. He did sneak a partial stick of butter from the butter dish last night, but that was our fault for not putting the butter away. Buddy loves to play , but is also to entertain himself with a squeaker toy. He is very eager to spend time with other dogs and humans. He will go into his kennel when we say “kennel”.

Buddy will jump up on the couch and our bed without invitation. He really is just wanting to be close to us and make himself available for us to pet and cuddle with him. We are working on him not jumping up unless he is invited. This will all come in time. Buddy would do well as an only dog or with another dog and would be best suited to have a fenced yard; this will also help you to ensure he is getting enough exercise.

Buddy is ready to meet his forever family and to get signed up for obedience class. Contact your placement advisor if you would like to meet this guy. We have not taken Buddy to an event before and we were informed the last event he went to he was a little anxious. So if you want to meet Buddy, please come early! We plan to be at the Apple Valley Petco on Saturday September 29th from 10AM to Noon. 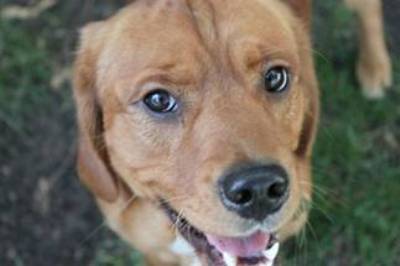 Aren’t I cute? Do you have a treat? 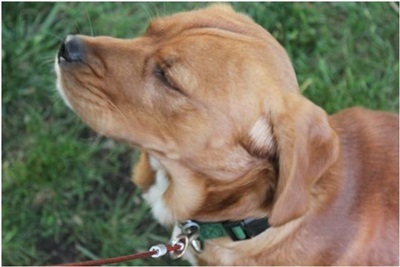 I love sniffing the air! 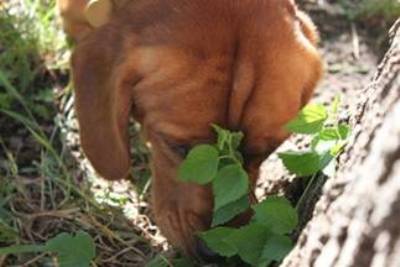 I love sniffing the ground too! 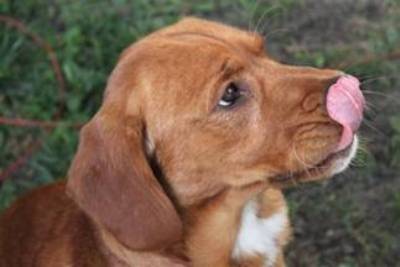 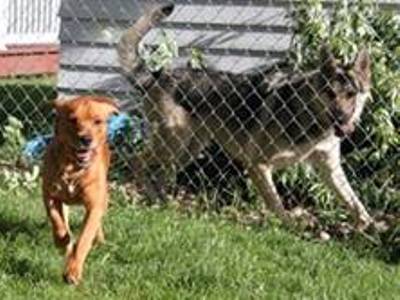 Foster Mom, did you see the dog next door?