Everybody needs a Buddy, and we at RAGOM have got one for you!

Buddy is new to RAGOM and is currently staying with his temporary foster Mom (TFM). Buddy was a stray that wondered into the yard of a Good Samaritan. That family let him stay for a few months, but he lived primarily outside with another dog and they were too rough with their play and got into mischief together, so the family needed to find Buddy a home where he could get more attention and training. Buddy is estimated to be about 2 years old.TFM has lots of good things to say about this friendly guy. Here are some of the great things about him:

• He is a perfect medium size at 54 lbs., and has a handsome black coat with brown "stockings"

• He likes every person he meets, although he can be over enthusiastic with his greetings, so needs to be watched carefully around the youngest and oldest.

• He hasn't had an accident, so it appears that he is housetrained.

• He is doing well with being crated during work hours at his temporary foster home.

• He is quiet at home and does not bark without cause. Given some exercise he is calm when in the house.

• He likes to play fetch with his ball. TFM has been taking him to a fenced tennis court to run around and chase the ball since his foster home does not have a fence.

• He is healthy. He only current medical problem is a skin sore on one paw that is being treated with ointment and is healing. He has an appointment to be neutered on 5/8. He has been brought up to date on all his shots and preventatives.

• Buddy loves affection and will rest his head on your lap and sleep next to the bed all night. Given permission he would probably like to share the couch and the bed with you!

• He has not chewed anything inappropriate, but no food should be left on counters and stuffed toys have short lives with Buddy around.

• Buddy likes affection, attention, praise and treats, so he should be easy to train. He is already learning sit and is now sitting to get on his leash and before going through doors to prevent him from bolting.

• Buddy travels well in a car and seems to enjoy getting out and about.

Unfortunately since Buddy spent his formative youth without much guidance he does have some areas for improvement. This is not surprising considering his lack of training, but should get better with consistent leadership in his new home. Here are some things that need to get better to help Buddy be a good citizen:

∗ Buddy does not have leash manners and has a strong desire to follow anything that moves; a combination that sets him up to be a dog that is likely to follow his nose and get carried away (or to carry his person away on leash). He is starting to work with a gentle leader but hasn't had much success with it yet.

∗ Buddy and a female canine companion at his last house played very hard together and tag teamed to cause the demise of a couple of felines. Between this and his general obsession with moving things he should not go to a home with cats and probably not one with small dogs.

∗ He has been reported to do some pee marking - but this has not been a problem inside at his temporary foster home where there are no other pets.

∗ Because of his critter obsession and his questionable recall Buddy is an escape risk at this time and should go to a home with a fence, and should probably not live with smaller children who may accidentally let him out or be bowled over in a doorway. Hopefully this will improve as he becomes attached to the people and place at his new home and also after his neuter, but for now he needs someone who can physically handle him consistently and build a bond that makes him want to stay at home!

Buddy has lived with other dogs in the past but has not been exposed much since coming into RAGOM, so his canine social skills are unknown at this time. This will change when he moves to his permanent foster home, so check back for his next update to see how he is getting along with his foster siblings and their friends.

Buddy will be moving to his 'permanent' foster home in Duluth this weekend after his neuter surgery. He will be ready to meet his forever family after he settles in by Lake Superior. We are hoping he will be ready to attend the Meet and Greet in Duluth on May 18th, so check back for updates if you would like to come out and meet your next Best Buddy! 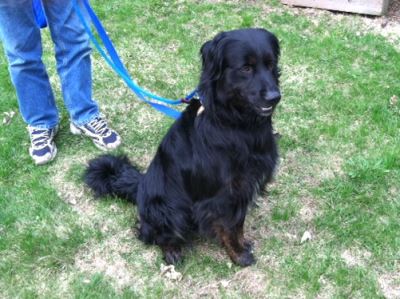