People will be waiting in line to adopt this wonderful guy! Buddy is a 6 1/2 year old neutered male who loves children of all ages, playing fetch, and enjoys cats. He is up to date on all his vaccinations which have to be given with Benadryl in a specific manner due to an allergy to the drugs. Heʼs also had his heartworm and flea/tick preventatives. Buddy will be microchipped when he goes for his wellness check this week.

While he was allowed to roam free on 8 acres most of his life, Buddy also seems to love the comfort of a home, is house trained, and loves affectionate rubs and petting. His previous owner states that he would stay with her while walking without being leashed, and always comes when called. While he doesnʼt pull too badly, he could use some training for leash walking. Buddy apparently doesnʼt like fences, because he dug under one once.

Saying that Buddy loves to fetch is an understatement. I have started playing fetch with him on a long line in my yard and he does great. He even catches a ball in the air with another ball in his mouth! He can hold as many as 3 tennis balls in his mouth and will drop the ball or object by your feet, then back up with a command “back up” and wait for you to throw it. He likes to play inside or outside, and can be a little obnoxious dropping balls in your lap. He can also be rambunctious while chasing the ball, bumping whoeverʼs in his way. Heʼs quite the show dog and very smart.

Buddy knows the command sit, (lie)down, off, and stay (for a very short while). Buddy communicates when he wants to go outside with a bark, or heʼll bark if he just wants you to play with him. He shows persistence in wanting your attention and perhaps could benefit from more consistent training. (He has dropped four tennis balls in my lap that were hidden in the house while writing this bio.)

Buddy has shown some aggression towards other dogs when he tries to dominate them . He would benefit from some more training in this area, but should probably not be in a home with other dogs.

Buddy has a health condition called Hypothyroidism and takes medication twice a day. He also has a history of seasonal allergies that may cause “hot spots” and takes medication when those occur. Buddy likes to be active, especially if it involves interacting with people.

Buddy is a wonderful family dog who will bring alot of joy and affection to your home. He rolls on his back easily for belly rubs and even greets new people without fear and with his tail wagging. Letʼs find this beautiful boy a permanent home soon! 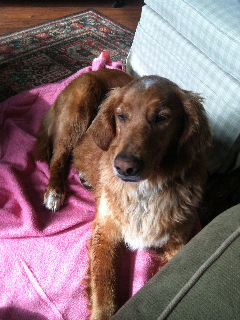 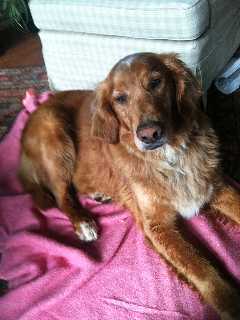 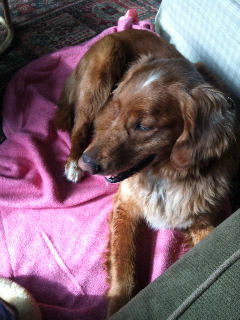 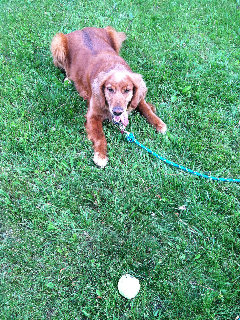