To our favorite silly little puppy! From Michelle and Cadence

HAPPY 1st Birthday, Cady, on 7/21/12!  I can’t think of a better birthday gift than becoming a member of the RAGOM family!

Cady was hit by a car on Tuesday, 7/17, and her family rushed her to the emergency vet.  Not only did she suffer multiple deep lacerations to her right front leg, but radiographs showed that it was broken as well.  Other than some road rash on her body, her leg appeared to be the only injury she sustained.  Her owners were unable to afford the surgery that she needed to fix her broken leg, and unable to dedicate the time to keeping her on strict cage rest if the doctor just splinted the leg and let it heal.  They decided to euthanize her, but luckily the doctor offered to have the owners sign Cady over to her so she could find a rescue willing to take Cady in and get her the surgery she needed.

This was when Cady’s luck began to change!  I work for the vet who saved her, and called RAGOM to see if they would be able to take her in to the rescue.  RAGOM said “yes!” and surgery to repair Cady’s broken leg will be on Tuesday 7/24!  She will also be spayed at that time.  We did chest and pelvic radiographs in addition to cbc/chem bloodwork and all of it looked great, so it appears that Cady’s leg took the brunt of the force of the car.  She is currently on antibiotics and 2 different types of pain medications.  After surgery, Cady will need strict cage rest for around 6 weeks in order for everything to heal properly.

As you can tell, Cady doesn’t look like your typical Golden.  She is a black Lab/Golden Retriever mix, though she looks more like a black Lab.  Her heart is pure gold and she is one of the sweetest, most loving dogs I’ve ever met.  She is 58 pounds, and is smaller in size.  She is great with kids (I have a 7 year old daughter), completely ignores my two cats, and is great with dogs.  Cady loves car rides and doesn’t seem to have any anxieties.  She did try to jump up and counter surf a lot the first few days, but has learned that we don’t allow that, especially with a broken leg!  She does need some obedience training, but she is a very smart dog and will learn commands and manners quickly.  She won’t be able to get much training while she heals, but as her leg gets stronger she will be able to do more training activities.

The first few days here she didn’t want to go in her kennel, but now she goes in willingly, which is good since she will be spending a lot of time there while her leg heals.  Most of the time she is willing to rest in her kennel, sleeping on a very comfy dog bed.  Cady is current on her vaccines and heartworm test and we will continue to use heartworm and flea/tick prevention.

I want to send out a huge THANK YOU to RAGOM for helping this wonderful girl and giving her a chance!  Her surgery will not be cheap, so if you’ve ever considered sponsoring a dog, now’s the time!  How can you resist those puppy dog eyes?! 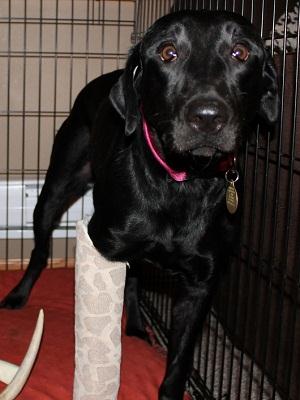 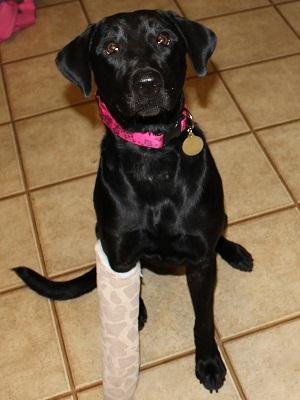 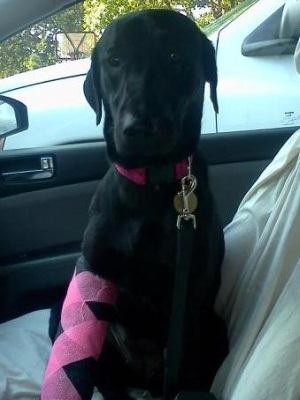