Sara D.
"May the rest of your life be full of the love and joy you deserve"

Champ just arrived in RAGOMland to start his life over. He came to us from the Northwestern Minnesota corner and was in a neglect and abusive situation. Besides being timid at first when meeting people and some permanent scars – he is all wags and kisses. His nose is scared from flies eating on him this summer, he is healing. He is going to be a very resilient Golden Retriever. We just got home from the vet – considering his history the only thing that we discussed is some early tooth tarter and gingivitis disease. He is up to date on vaccines, microchipped and is heart worm negative. We were told he is about 2 years old and weighs 56 pounds – he needs to gain 5-10 pounds. He will be neutered next week, but will be home this weekend to meet potential families. 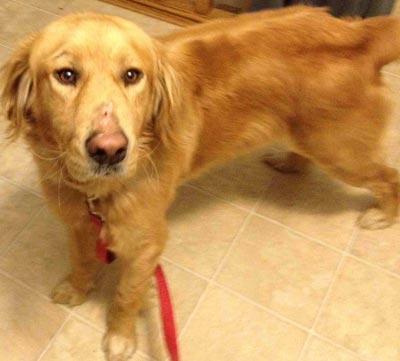 He met his foster brothers, resident GR Tyson and Chance (12-021) without any issues – no barking or growling on Champ’s side. You may remember Chance played the role of foster brother to Tatonka 12-321 and he is learning to tell other dogs when enough affection is enough – good boy, Chance. They ran and played last night. Champ followed the other dogs around as they played catch and fetch.

Due to his background, Champ cowers to loud noises and sudden movements – even with the other dogs. We recommend that he goes to a more quiet family and one without kids. He wants to be your best snuggle bug, so you have to be comfortable with him on the couch with you.

He was reported to live outside all his life, so we are being careful about him being inside and learning to go potty. So far no accidents, but he is kept tethered to FM to avoid any markings in the house. So far he isn’t interested in any toys and fussy about what he is eating – this is due to the stress of being pulled from his home, living with a GS until he could come into RAGOM and a long transport. He will be a different boy by his next update – stay tuned. If you are looking for a boy that needs your extra attention and lots of affection in return, contact your placement advisor to meet Champ.