Charlie joined the RAGOM family after being found locked in a car (had been there all day) and was rescued by a police officer. There were many attempts to reach her owner, but her owner chose not to pick her up. Once her hold was up at the local pound she was released to RAGOM. Charlie is spayed and she's UTD on her shots. She is Heartworm negative and her fecal test was also negative. Charlie is a very healthy 1-1/2 year old with a birth date of Nov. 6th 2013 . She weighs 61 pounds.

Charlie knows her name and answers to either Charlie, Chuck or Chuckie. I was surprised that she responded to Chuck so I tried calling her Charles, but Charles isn't a name she readily responds to. Charlie arrived to our home after a long journey. She was a lucky girl and had 2 sleep-overs with wonderful RAGOM volunteers before arriving to our home. A big thank you to all that helped Charlie on her journey to our home!! Charlie is a super sweet girl that is perfect!! Well she is still young and can be a little mischievous at times, but that's the fun part of having a young one in your home. She's house trained and will let me know when she needs to go out. Likes to sleep in her kennel for now (door open) in our bedroom by our bed, but could/would easily transition to a dog bed or your bed. Charlie will move out of her kennel in the morning and sleep by our bed. She doesn't get up on our couch or bed (which we allow) so I'm not encouraging her to do so. She does like to lay her head on our bed and couch, but the invite onto the couch the other night didn't get her to come up. Charlie loves to snuggle and would be a great bed warmer on cold nights. I'm doing the best I can to not encourage her onto our bed, but I have a feeling that might happen before her stay with us is over. 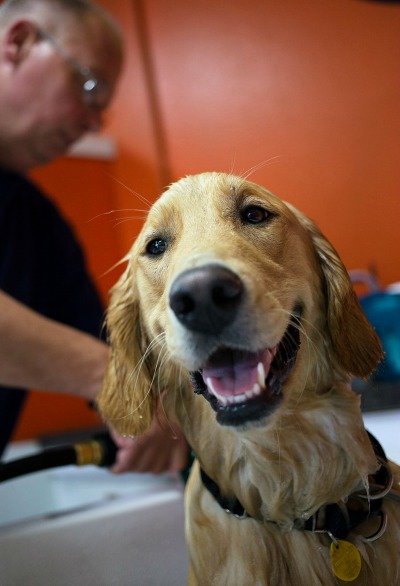 Her recall is great and knows the word 'no' and stops whatever she's doing almost instantly. Her love for other dogs is huge as are for the children that are playing in our neighborhood. Charlie will need another dog in her home. One that is is still playful and likes to run, romp and chase. I feel so bad for her because our resident dog doesn't like to play and no matter how hard Charlie tries to get her to play our resident dog keeps telling her 'no'. It seems the Doberman Pincher is not her favorite breed of dog so if you have a Doberman Charlie wouldn't be the right fit for your home. While I've not cat tested her she did hear 2 cats at the vet clinic meowing in their crates and she was interested, but didn't show interest in meeting them. She also saw another cat walking in the lobby at the vet office and that cat she did want to meet and would of probably chased it, but it would of been to play and not harm. Charlie gets along with children of all ages, but because of her size and exuberance she should be adopted into a home with children 8 years old and up. Life for Charlie is just one big happy party and in her excitement to play she could easily knock over a toddler.

Charlie still has her puppy energy, but she's not a high energy dog. She'll pick up socks laying around, but just tosses them and plays with them. No destruction of any kind. She loves stuffed toys - again she does not destroy them and is learning to play fetch. Charlie isn't good about dropping the ball in front of you, but she's great at dropping the ball behind you or dropping it when you throw another ball. This girl can run like the wind and for that reason I feel she needs a fenced in yard to stretch those legs and have fun. No invisible fence. Charlie knows sit, come, lay down (sometimes) and takes treats so gently. She even likes the vacuum and thinks its play time when your cleaning house. Charlie pulls when walking - just so many neat things to sniff and see, but we use a harness to walk her and her pulling has decreased. As she matures and walks more with a harness I feel her pulling will end. 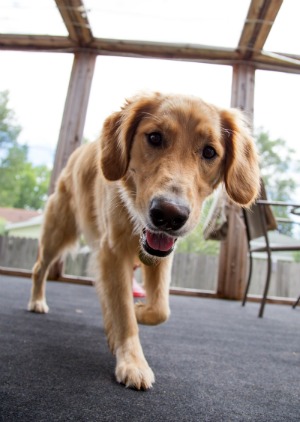 Charlie is still a young dog and if not given ample play time she will get into mischief. Her perfect home is with a family that has loads of time to spend with her. Someone who works from home or works part time. After spending time in a locked car (I'm sure that wasn't the first time) I don't want her days spent in a kennel for a full work day. I should mention that Charlie is a talker. If you've ever had a Golden in your life that talks you know what a wonderful thing this is. We get such a kick out of listening to her talk - kind of a moan, but not a moan with many different versions of sounds. We've not had a talking Golden in our home for a while so it's been an added joy for us. There is a lot of potential in Charlie. Her love for children and people along with her gentle nature and her wanting to please I can see her being a natural therapy dog.