This is Chief! He is seven years old, and such a love! He is a beautiful boy with deep, shining red hair anda gorgeous face. He is healthy, and heartworm and parasite free! He does need to lose a little weight, (he is a large 77 lbs, and should be about 70) but that should be no problem since he likes to be so active! He does great with other dogs and with cats. Chief lived with a couple in northern MN who unfortunately could not handle his energy, and ran into some health problems of their own, so they made the hard decision to let RAGOM find him a new home.

Chief is going to make a great dog! He is, however, going to need some work to get him there. He is very sweet, but he does have a lot of energy for a seven year old. He has a very puppy-like exuberance! He gets very excited about things, and while he doesn’t jump, he does get rambunctious and bump into you, so he would be a risk for anyone not steady on their feet. (He actually knocked over the woman in his first family, causing her to break her hip) He is easily excitable, and will jump up barking from a sound sleep if he hears something outside. With some redirection, we can get him to calm down pretty quickly. He does do this at night sometimes too, so that will be something to work on. He was trained when he was younger, but his other family was not able to keep up with that, so he remembers how to “sit”, and he has a couple of tricks that he knows (sit pretty, and shake) but other than that he needs to work on dusting off other commands. He can get pretty anxious sometimes, and has had a couple of poop accidents at our house when he has had a really long day, and one when I took him to my grandma’s house with me. I think that was just because her house was so new to him. I would think that wouldn’t happen anymore when he gets really comfortable in his forever home.

He walks well on a leash when we use an Easy Walk Harness, but he will pull on a flat collar. He will also turn around and pull out of a flat collar, so it will be important for his forever family to use either a harness, or a Martingale collar that tightens when he tries to pull out of it. He loves to walk, and needs a LOT of exercise. He has stamina that puts his FM and his foster sister to shame! Ideally he would get some off leash exercise every day. When he was younger, his previous owner would ride on the four-wheeler and let Chief run with him. He doesn’t have great recall, and so any off leash exercise should be in a contained area until he has learned to come when called.

Along with not having great recall, he does like to try to bolt out doors. (And he doesn’t mind knocking you over and taking you with him!) He got out our front door when it didn’t latch all the way one of his first days here. Luckily, there was something awfully interesting in the front garden to sniff, so I was able to catch him. He will also try to rush out the gate in the back if one of us is going in or out. He would be OK on a leash in a backyard, so I am not requiring a fence for him, but he should be supervised if using a tie out so he doesn’t slip his collar and run off.

One funny quirk he has is that he needs to have something in his mouth when he gets anxious or excited. Usually, he will just carry whatever it is in his mouth, but sometimes if you’re not watching him, he will start to rip up whatever he has. We have lost a couple of towels, throw pillows, and a sandal to him so far, but he is getting better with that. He was uncomfortable giving things up to us for the first couple of days, and would growl a little when we went to get him to drop it, but that has gone away almost completely. He will also steal food off of plates if he has half a chance. He got half a steak his 4th night here! He doesn’t counter surf, but you have to be very careful to watch your plate like a hawk!

Chief rides very well in the car, but you have to be careful when you open the door or he will go blasting out. He is also crate trained, but he was crated quite a bit in his last home, and so doesn’t like to go in if he knows you’re leaving. He does fine for a whole work day, and would likely do fine with free roam once he was settled in. We left him alone out of his crate here for a few hours one day, and he did fine.He also sleeps in the living room by himself. He loves to lie in bed with me, but he doesn’t settle down enough to sleep in the bedroom, and when we tried, he would get too excited, and I was constantly jumping up to settle him down, or wrestle my blanket away from him!

Overall, Chief is going to make an absolutely FABULOUS dog, but he is going to need some work. If you think you are the person to provide the structure and patience he needs, please let your placement advisor know! 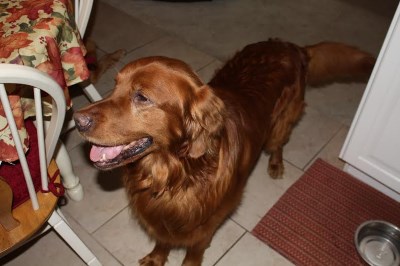 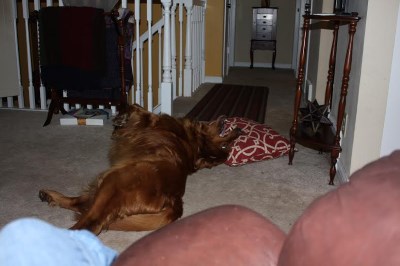 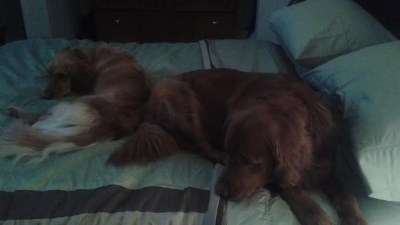 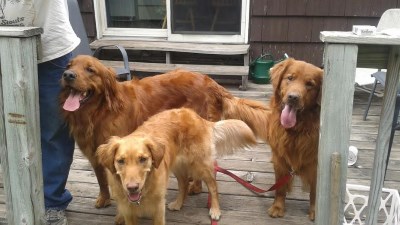 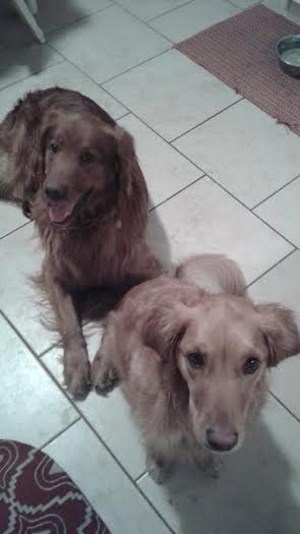