"In memory of Allie." -Sally P and Lynn

CJ is a 13- to 14-year-old male purebred Golden Retriever weighing in at about 90 lbs. He needs to lose at least 10 more. He is up-to-date on his heartworm and preventative medications. When he came into RAGOM, he did test positive for a tick disease, anaplasmosis, but he has finished all of his medications and he has no symptoms. He is a very sweet, gentle, and handsome boy who loves attention from his humans. He will follow you around the house, always hoping that you have a hand free to pet him. CJ has been with one family since he was about 1. They loved him very much and made the difficult decision to surrender him to RAGOM as he was an outdoor dog who loved to wander down the road and cross the road to get to a nearby lake. They became increasingly worried about his eyesight and hearing not being as good as when he was younger and that he would no longer hear cars coming. He has quickly learned to love indoor living and especially air conditioning! He gets around well for his age. When it is boat ride time, he runs down to the lake. He does have some stiffness and probable arthritis in his back legs. He refuses to go down the stairs in the house, but will do stairs on the deck. CJ has an issue with heavy panting. At this time, we are looking into why he is doing this. We will be checking some more bloodwork and getting advise from vets. Due to that, however, he has trouble going on anything other than very short walks as his breathing becomes very labored. He will also pant heavily at night. More to come in future updates on that. He is currently on pain meds for sore legs.

CJ does like to hang out outside if he can find a cool spot. He likes to find a nice piece of dirt to dig a comfy, cool hole to lie in. He will chew on a tennis ball a little, but has no intentions of retrieving one. He likes to walk in the lake to cool off, but has had little interest in swimming. He loves his pontoon rides, however! He does not want to run away anywhere, but he will wander out of curiosity, so he could be outside without a fence if someone is with him, but due to his breathing issues, he cannot be on a tie-out. CJ grew up with children and loves people of all ages. He would not do so well with children who want to play or hang on him either as he could not handle that much activity. When in the house, CJ just plops down and sleeps, until you go into another room, and then he will follow you and nudge up against you until he gets a nice pet. He has free run of the house and is not destructive at all. He has never been kenneled and would not need to be. He is completely house-trained and will go to the door when he wants to go out. He does great with our older dogs as they enjoy the company and no one wants to play.

CJ is a very nice loving older gentleman. He is very well-behaved and very easy to have around. His needs revolve around love and comfort to live out his senior years. His ideal home would be a laid-back environment with people around a lot to spoil him. He would do fine with another dog, but is also fine alone. 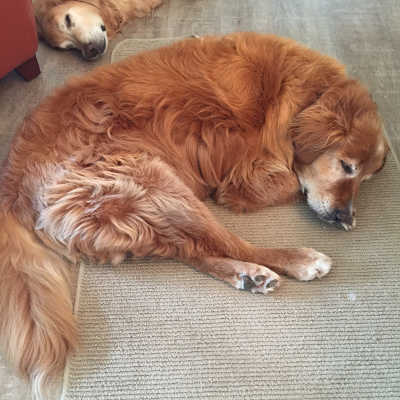 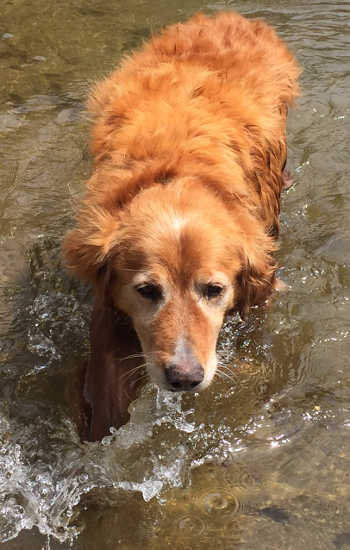 Cooling off in the lake! 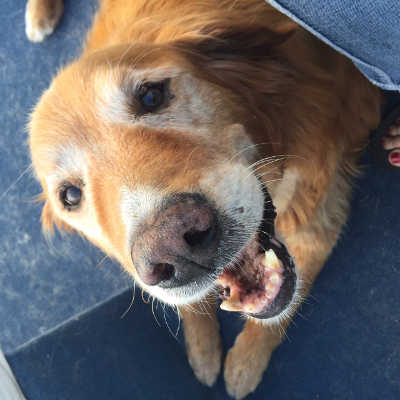