Daisey is the cutest peanut you’re going to find!   Her face and size make her look like she’s only about 6 months old, but the vet is putting her closer to 4 years old.  It’s like having a puppy that didn’t grow up.  She weighed 32 lbs at her vet visit and is only about knee high.  We are treating her ears for infection because they were incredibly dirty.  Daisy also is being treated for 1 month for Ehrlichiosis with a daily pill of doxycycline.  Ehrlichiosis is transmitted through brown ticks and it is not common here in MN.  A blood work up was done on Daisy and her red blood cells were normal, so she does not have anemia.  The rest of her blood work was normal as well and she is not showing symptoms of it, but is being treated just as precaution.

We have had Daisey with us for a week now and she has been a terrific house guest.  I can’t complain about a single thing with this little girl.  We have not had a single potty accident in the house.  She knows her name, come and sit really well. She likes to go for walks, but uses a harness because she will pull on a flat collar.  With her being a smaller size, she is pretty easy to work with and won’t pull you down the street.  Daisey loves playing with toys!  She’ll sit and chew on them or pounce when she chases them.  She hasn’t counter surfed (kinda short for that) or gotten into anything she shouldn’t.

Daisey’s favorite things are getting attention and giving love!  She loves to snuggle with us on the couch or wiggles herself onto your lap if you’re on the floor.  She is so excited to see us when we get home and loves to be petted.  She stands at the top of the steps and gives me a play dance while I’m walking up to her.  I actually just started working from home this week, so she lays in my office with my resident and takes a nap waiting for me to get up and leave the room.  At night, she walks into the kennel in our bedroom and sleeps there.  She seems to be kennel trained even though she doesn’t need it.

Daisey’s journey started in Arkansas where she had a litter of puppies, was fixed and then had two days of riding in a car before making it to our house.  A huge Thank You to all of the transporters and volunteers who have helped Daisey into foster care and soon to a forever home.   Please, let your placement advisor know if you would like to meet Daisey!  As of right now, we have no requirements for a fence and Daisey would be ok with kids and cats that we know of so far as well. 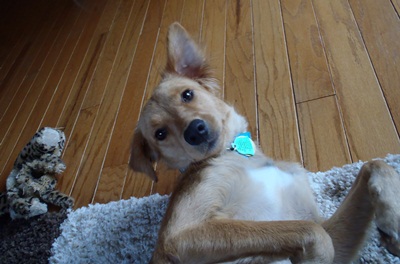 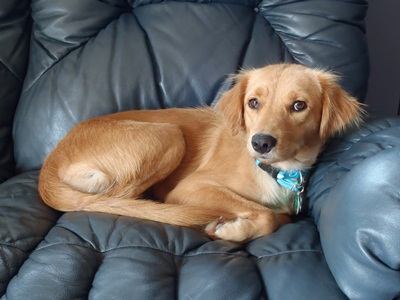 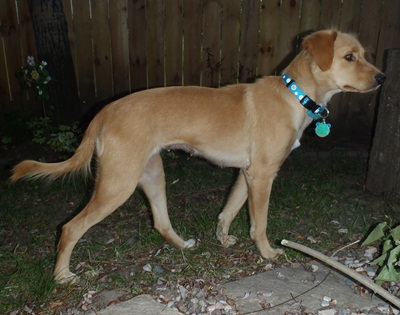