Dorie 12-103 is one of the young females that was rescued over the weekend from the Missouri commercial breeding kennel. At the tender age of 1-1/2 she has already whelped at least one litter of pups. She was still producing milk when we met her on Sunday. She is on antibiotics so she doesn’t develop mastitis and Rimadyl for the engorged pain. We are watching to make sure she doesn’t get an infection and she appears to be drying up which is good news. I’m very happy to report that she does eat with some canned food added to her kibble. I add the antibiotic and pain meds to the canned food and she is eating the pills, thank heavens. She’s very petite and skinny after whelping and nursing pups. We’ll be working at putting some meat on her bones. She also drinks water, which is the first milestone we watch for with these scared dogs.

She is very skittish and when not resting in her kennel, she paces and watches to see where the humans are to make sure she is out of reach. We leave a trailing leash on her so we can safely catch her and she is limited to only two rooms of the house. For the past couple of days, I have been stepping on the leash so she has to stop, I sit on the floor, scoot over to her and scratch her neck and ears. She’s starting to get used to my doing this. She doesn’t relax yet when being petted, but her eyes don’t look as fearful as they did at first as she’s learning that I’m not hurting her. Dogs from commercial breeding kennels are very scared of people, new places and objects because they’ve never been anywhere, seen anything or had any human socialization. Her job has been to live in a kennel run and produce puppies to be sold to brokers who sell to the pet stores. We can’t get back the socialization that she missed as a puppy and while she will eventually get better and become someone’s loved pet, she’ll always be more skittish than your house-raised dog. But, she can learn, she can go to obedience training some day, develop self-confidence and grow into the dog that she was meant to be.

We have ventured outside a few times wearing multiple leashes and equipment. She is so skittish that if she were to slip her collar, I’d never catch her in my fenced in backyard. To keep her safe, she wears a halter with a long lead and a rope slip leash with additional leashes attached to make it longer. I hold on to both leashes as we walk around the backyard. She isn’t relaxed with me following behind attached to her and the leashes. She hasn’t been comfortable enough to do her bathroom duties while leashed to me outside. It’s more like she’s pacing and sniffing and can’t figure out why I’m always 15 feet behind her. She keeps moving to get away and I keep following. After a while, I reel myself up to her, sit down and again scratch her chin and ears. She has met the other 6 dogs in her foster home, done the dog sniff and greet, but hasn’t yet started following them around or playing with them.

I want to thank Devon who took the beautiful picture of her headshot in the crate on Sunday. My cell phone picture of her in our lower level isn’t a good picture, but I wanted to try to show a standing up picture and she is very unnerved by the phone pointing at her. She’s a very gentle, scared girl. More to come as she starts to settle in. 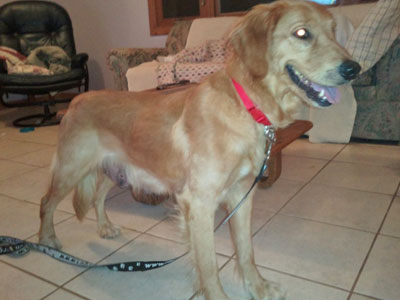