Friends of Flicka
"In memory of Rolf Ljungkull"

Hi there, Let me introduce you to the sweet Ember 12-323. He is a golden mix. Ember has come to RAGOM as a mystery. He was a stray and was found in a family's yard up in northeastern MN. These good samaritans took him in, fed him and loved him and called RAGOM and he is now in our home as a foster.

Ember is approximately 7 to 8 years old. He is neutered. Up-to-date on shots and is microchipped. We had blood work done on him and found out he is heartworm positive. So treatment has begun with Doxycycline for 30 days and then onto the shots of Immiticide. Ember does have some range of motion issues in his hips and were going to start him on an anti-inflammatory but due to him needing heartworm treatment, we decided to hold off so it is not so hard on his kidneys and liver. Ember weighs 88 lbs. The vet advised that he needs to loose 10 lbs and that should help his hind end area. So he is on a diet. Otherwise, he is a healthy happy dog except for the heartworms and has no obvious outward sign of heartworm disease except for his bloodwork.

Ember is a beautiful dog! He is apricot and white in color along with a very sweet disposition! I have two of my own Golden boys, one being a pup and Ember just ignores him. He has shown very little interest in our two cats. All three dogs will drink out the same water bowl together with no issues. There is no resource guarding at all. If anything, Ember will retreat.

He is crate trained. We had to take the mats out of his coat and give him a bath and he has the patience of a Saint! A very good boy! He does not know sit or down and are working on that. Ember does come when called. That is pretty good for a dog that was just named three weeks ago! Ember is a very sweet dog and he bonds to you very quickly. This dog does not bark. When I get home from work, he will "Roo Roo Roo" to you softly. This goes on for about a half an hour. He is just so happy to see you! Ember is definately a velcro dog and just loves attention but is not pushy about it. He loves to be petted and stroked and lays down next to your chair. Ember will roll over for a belly rub! He does have the Golden habit of following you room to room though. He rides in a car great and just lays down in the back seat and relaxes. He takes treats very gently and gives gentle kisses. He is great with kids from what the good samaritans have told me.

This guy is an awesome teddy bear and whoever is his forever family will be very lucky! I will give another update about Ember soon! Thank you for reading! 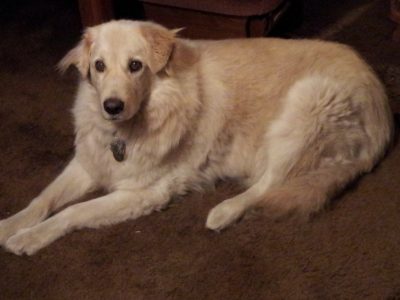