Henry entered foster care on May 6th. He weighs 84 pounds and has a pretty long, tall, and lanky frame. He is a big, sweet dog, estimated at 1-2 years old. He was a stray for at least some part of his life and doesn't know basic commands yet -- but what he lacks in skills, he more than makes up for in a loving personality. He has many Golden traits. He loves being petted (especially if you are sitting down) and asks for attention and has the Golden lean. However, he has shown no interest in counter-surfing so far! He is crate-trained and just gives a few barks when crated -- but does expect treats while kenneled. So far, he hasn't had any accidents at our house. He bugs us by hanging out and panting a lot if he has to go out and also has put his paw up on the couch to indicate wanting to go out. He jumped up on the couch a few times on day one here, but I gently redirected him and he hasn't tried to get up on the furniture since. Such a polite gentleman!

At a previous foster, he did pick up things that didn't belong to him, such as clothing items to chew on. He also ate a plant. He hasn't done any of that here yet and we have a lot of stuff sitting around - but it's nothing very interesting. As with all younger dogs -- it's best to have stuff put away. But I think he is learning what is his and what is not his.

He is a tiny bit mouthy, like many young dogs, but this has really improved in the last week with us just ignoring it. He does bark when people come to the house (as does our resident dog, who is probably egging him on a bit). But he is very friendly. He met some young children (approximately 6 and 4) while we ate outside over the weekend at a restaurant, and he was super gentle with them and did not bark. Only due to his size, I think it would be best if his forever home did not have very young children -- he's just a bit clumsy and it does hurt when he steps on our bare feet.

I think Henry would prefer a buddy, whether that is at his forever home with family or friends that he will see frequently. He needs that canine companionship and some modeling of what it means to be a dog. And another dog will help burn off some energy.

He walks pretty well on a martingale collar and, with continued practice, will definitely be a pro in no time. He does have a bit of a prey drive, so it is best if he is walked by only older children or adults. He is a happy, healthy, gentle dog. This gentle giant will make some lucky family a wonderful lifelong companion. He is getting neutered this week and will be ready to meet his forever family! Please contact your placement advisor if you'd like to meet Henry. 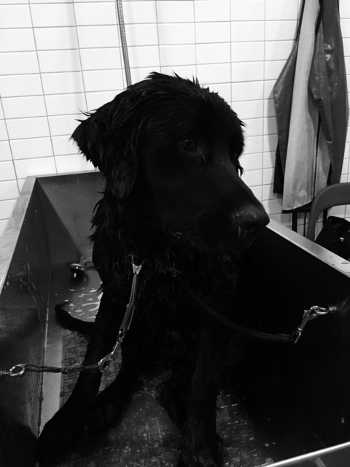 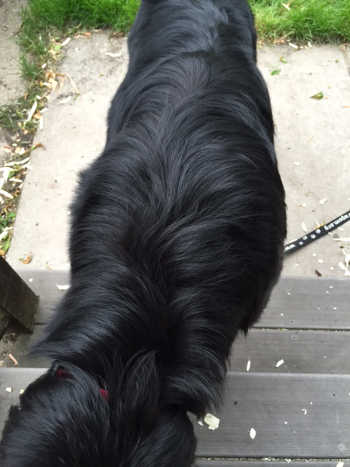