I'd like to introduce Ike! He will be 6 years old in April. Ike was a stud boy from a breeder and I'll bet he made some beautiful babies :). The breeder thought Ike might have hip issues and didn't want to pass that on to any puppies so asked RAGOM to take him. Thank you! Ike was checked out at the vet and there were no concerns about his hips or his knees. He certainly doesn't show any signs when he runs. He is house trained but still has a bit of submissive urination. That has diminished as he has had time to chill and feel safe.

Ike loves all people--all people! He wants to be wherever people are--especially his foster mom but really any person who comes into his world. He was very nervous when he first came and after being here for 10 days now, he is still seeing many things for the first time. He didn't eat more than a cup of food for the first 4 days but is now eating fine. He was beside himself with fear the first few nights here--crying, barking and pawing at his crate. The vet started him on a mild anti anxiety med to help him calm down a little in order to be able to learn that he was safe. It is working! He is not crated now and does fine--except for shredding some papers in my office :)

Ike was very nervous around my dogs when he first came. I have a 10 year old male and 18 month old female. He growled at them and he growls at his reflection in the oven door or dishwasher. He had quite the argument with the dog in the dishwasher the other day! Those are covered now and he is fine with that. It's all NEW to him! Anyway--he has relaxed enough now to chase and play with my female outdoors. And to run with a friends female at their home. The jury is still out on whether he could live peacefully with a male. But he definitely needs a female in his forever home.

He's so very loving and sweet! He has so much to learn and just needs time to chill and patience as he figures out the life of an indoor Golden.

Ike needs a forever home with another medium to large female to learn from and no kids under 10. 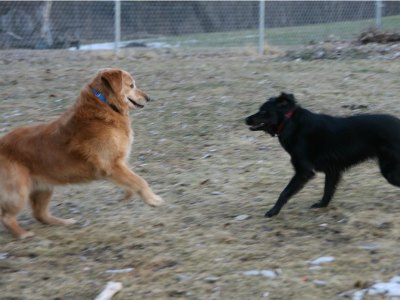 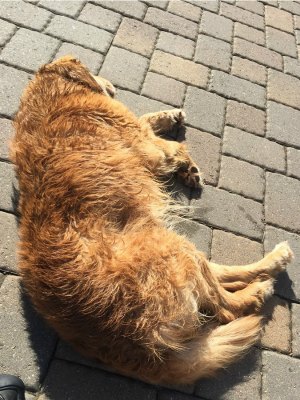 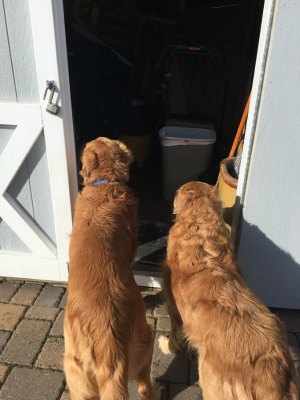 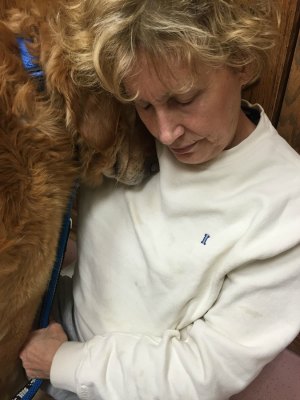