Iona joined the RAGOM family with a group of ten other dogs from a hoarding situation. The dogs were very underweight (starved) and spent two weeks with the Humane Society under their care. During this time, she was carefully fed to allow her body to begin to slowly regain her weight. She also spent time with staff one-on-one to get petted, treats and learn that good things come from people. She was also brought up to date on her vaccinations: rabies, bordetella, and DHPP.  Next step in her rehabilitation was to leave the kennel life and live in a home. Here’s where RAGOM came to the rescue and I became her foster.

So who is Iona? She is a petite light colored lab mix weighing about 29 pounds. The vet thinks she will be about 32 pounds when she regains all her weight. The golden color on her ears and throughout her body very likely is from a Golden retriever since there were Goldens in the group. Iona is about four years old and will need to be spayed before she is adopted. She hasn’t had puppies. She has a lovely soft coat. Her body is filling out nicely and she is gaining weight. She has beautiful brown eyes.

Hoarding dogs are often undersocialized. She appeared fearful and had to be carried to and fro from the car to the house to the vet, but that fear is disappearing quickly. She loves to ride in the car and is a very good passenger. She now likes to go out the doors on walks. She loves exploring the backyard. She is worried when she sees/meets new people. Slow introductions and reassurance especially with a treat from the new person breaks the ice and she has made a new friend.

One of the nice things about Iona, as far as a foster and possible adopter concern, is that she has not had any accidents in my house. She was housebroken from day one. She can be coaxed into her crate with treats and settles down. If she complains, it’s a lovely serenade of vocalizations/howling that she has perfected. It’s somewhat musical and sometimes humorous to hear the range of sound. She has been good using baby gates as well.

Iona is very curious and eager to explore her new world. She checked out the house thoroughly and does the same on walks. She has a lot of energy for a dog who came from a bad situation but she also calms down easily. She walks nicely on a leash and enjoys her walks around the neighborhood or a park. When she is a little scared, she will wimper. We just stop and I pet her and tell her she’s a good dog. That’s all it takes and we’re on our way again.

Iona is smart. She had no experience with toys but that changed here.  Her favorite toy is a tennis ball. She likes to chase them and after only one day, she was retrieving them. She is very fast and agile. She can jump. She is cat-like in her play with the ball. I enjoy watching her roll around on her back in the grass with a ball in her mouth and pawing at it. I’m guessing she would love catching frisbees.  Her jumping up on me has lessened as she has learned off, no and we have developed more communication. She wants to please and has shown her intelligence. She also wants to snuggle up with you in bed but will also sleep in her dog bed. One of my favorite moments was not waking her up the first morning because she was snoring and so at peace out of the kennel and in my home.

With a dog who has been in a hoarding situation, they may be more comfortable with dogs than people but they may also have suffered from more aggressive dogs and competition for food. Anyone adopting Iona will need to deal with both animal and people socialization. Currently, she is fed separately 3-4 times a day a cup of food to allow the slow weight gain needed for her body’s adjustment to food. She is also spending time one-on-one with me not my dogs because of issues with my large Golden. She may have been picked on by larger dogs and feels very insecure or she just doesn’t like her. After only a week, I’m feeling like she would do best with adults because of her under socialization and also that she would LOVE to be an only dog and have people who spoil her and make up for all the love she has missed so far in her four years of life. She is lovely. She is happy. She is smart. She and I have had many enjoyable times together already. If you are touched by Iona’s story and feel that you have the patience, kindness and a postive approach to training, please contact RAGOM or your placement advisor and check out Iona. She is going to make someone a wonderful dog. 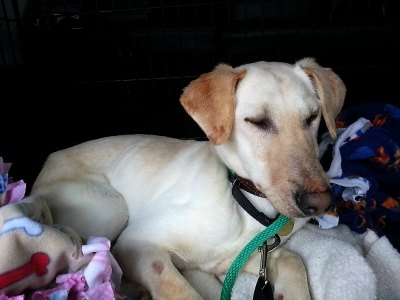 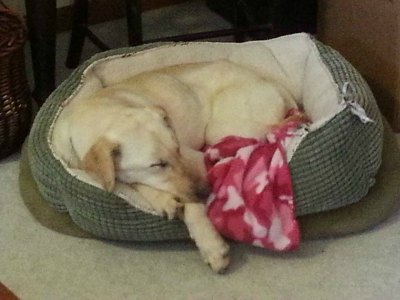