Jack arrived safely at his foster home in Cedar Rapids Saturday after a long trip from Fargo. Many thanks to a wonderful group of RAGOM volunteer transporters who brought such a very nice dog a very long ways to stay with us. I am surprised none of them decided to just keep him in the car and take him home with them!

Jack is a taller, bigger (74#), handsome, darker red, 2 years and 8 months old neutered male, up-to-date (UTD) on all shots, and is one very laid-back kind of guy, except for his tail. It is always wagging! The funniest thing about him is how he wags his tail-- not just side to side like most, but more of a circular motion that almost makes him look like he is going to take off like a helicopter!

"Gentleman Jack" would be a more descriptive name for him, but who wants a dog name with more than two syllables in it?  Jack fit right in and made himself right at home the moment he came through the backyard gate. He is calm and submissive and nicely met all the dogs (5) outside, then ventured inside to meet the 4 cats and 2 kids in the same manner. Seldom do we have a new foster arrive without a minor skirmish of some sort with at least one of the various four-legged creatures.

Since Jack did so well on his grand entrance, and knowing he was housetrained, we had no reservations whatsoever about him having free roam in the house his very first night with us. He did perfectly fine.  Jack's surrendering owner lived in the country with a big yard and had free roam. She turned Jack over to RAGOM because he occasionally roamed from the yard and into the surrounding country side.  He always returned, but she feared that he may become a victim of either wild animals in the area or some not-so-appreciative farmer. A fenced yard will be a must for Jack as he learns "there's no place like home- especially during the hunting season"!

Jack went to the vet today for a general physical. He behaved very well and had no major health issues. He was micro-chipped, was negative on all test results, and received an oral med to take as a precaution against infection on his nose wounds which are healing, ear infection applications, and his Heartguard and Frontline meds. He is "good-to-go" as the vet said.

Gentleman Jack behaves as if he has been here for 2 weeks, not 2 days. He is a delight to have around, which means a lot when there are so many other creatures around at the same time!  One other thing about Jack that impresses us is how quickly he picked up on the Gentle Leader. Once again, one would think he has been exposed to it for 2 weeks, not 2 days. He is one smart, obedient, handsome, well-mannered, and loving Golden. (Aren't they all??!!) 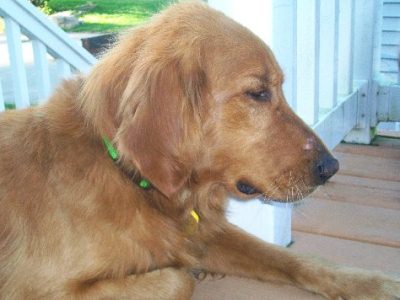 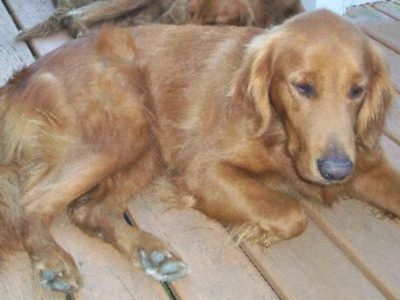 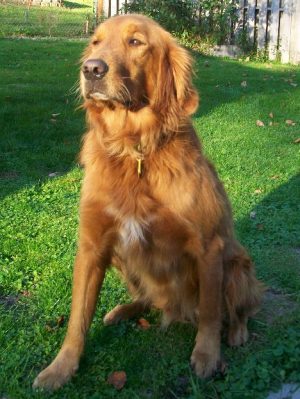