Jackson is a seven year old purebred golden retriever. His birthday was 8/27/07. He is a big boy, currently weighing 103 pounds. According to the vet he could stand to lose about 10 pounds. He is heartworm negative and up-to-date on his vaccines. The only health concern he has is on his back right foot he has a lick granuloma. He is on antibiotics for a few more weeks and then he will have it rechecked. If it has cleared up he can be neutered and then be ready for adoption.

Jackson is a retired breeding boy and has lived outside his whole life. He hasn’t experienced much outside of where he lived for seven years, so everything is new to him. He is pretty shy, but loves his new life of living indoors. His favorite thing to do is to curl up on the couch, and it takes quite a bit of convincing to get him off the couch and outside to do his business. He is not housetrained, as he gives no signal of when he needs to go out, but as long as he goes outside regularly there are no problems.

He is the sweetest dog and just wants to be loved. Indoors he doesn’t approach us for attention if we are standing up but if we sit on the ground he will come over and roll over for a belly rub. When we pet the resident dog he gets a little jealous and will come over to make sure he gets his fair share of attention as well. Outside he is a bit more confident and will approach us for attention, sitting down and leaning into our legs with his tail thumping on the ground. 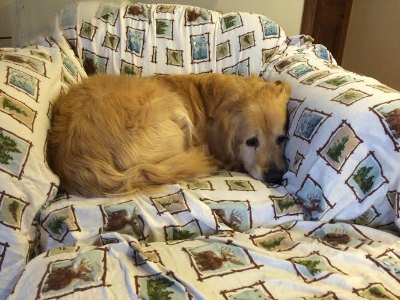 Jackson is making baby steps and getting more confident each day but will need a patient family that will help him continue this progress. We have seen him play with our resident dog only once, but he puts up with all of the resident dog’s continued attempts to play. He definitely follows the lead of our resident dog, and would love another large confident dog in his forever home to continue to teach him all about living the golden life. He needs a calmer and pretty quiet environment as well; lots of noise and commotion make him nervous. He is reportedly good with children but would prefer to live in a home with older children or none, as it could be too much going on for him to be comfortable. He is good about coming when called outdoors, but since he is shy and could be easily spooked, he should go to a home with a physical fence.

Jackson is a great dog, if you are interested in him let your placement advisor know.