There is a new little cutie in RAGOM Land and his name is Jeff 15-080. Jeff arrived at our home on Saturday, March 28 after a transport from Alabama. He is temporarily fostered in rural Rochester and will be moving to his permanent foster at the end of next week.

Jeff is estimated to be a 2-3 year old mixed breed. He is fully vetted, neutered, and weighed in at a whopping 21.5 pounds. He makes our field cocker spaniel look like a giant! He has a rather long torso and shorter legs but a beautiful black coat. In Alabama he was treated for mange but our RAGOM vet has cleared him of any skin disorder--he has no bald spots, does not scratch and his coat is black and shiny. He is a healthy boy with a good appetite, sweetened with a spoonful of wet dog food over his dry kibble. His only accident was on the first evening of his arrival. Since then, he has been following our resident dog's example and doing all his business outside--that's why I think perhaps another dog in the home would be a good role model for Jeff to follow. He has engaged our resident in playing with him outside where he behaves in a very carefree and happy manner. He is an extremely fast runner and has sort of a bunny hop run. Jeff does not come to his name and loves to run around me when he is outside, playing "catch me, catch me", but will follow me into the house if I pick up his trailing leash and say "let's go in now". He already knows what side of the outside door to sit by so I can open the door to let him in. Jeff is totally cat friendly to both the inside and outside cats. We celebrated Easter on Palm Sunday with a house full of people and kids 5-13 years (who we advised to let Jeff rest since he just arrived) and he seemed to handle the all the chatter and activity quite well. 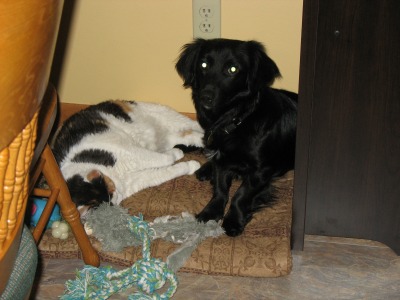 I somehow believe Jeff's previous life was less than desirable. He is somewhat skittish (getting better), does not like to look you directly in the face, is much more afraid of men than women, gets scared if his collar is pulled on, and doesn't want to walk on a leash but he is small enough to be picked up and carried. He enjoys resting on his blanket behind the dining room table or in his kennel if we have to go away but wants so bad to join us in the living room. He will peak out to see where we are and what we are doing and occasionally will come part way--still afraid to make that final step into the next area. I believe once his trust level comes up and he knows that we humans are not all bad, he will begin to blossom. He occasionally will sneak out to grab a toy (especially a stuffed one) and will proceed to desqueak it and pull it apart. He loves a Kong or something similar filled with peanut butter. Jeff is a quiet, gentle fellow who has no trouble sleeping on my lap in the evening while I am TV watching. He is so small and quiet that he would be a great companion for someone with limited space and strength. He can be carried, picked up, petted, fed, etc. without any hint of aggression. Once this cutie learns that humans bring only goodness and can be trusted, he will be a loving companion. 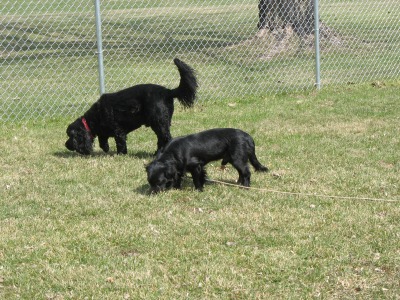