Jesse is a 7.5 year old, 64 pound, neutered Golden retriever-yellow lab mix. He has the softest white fur on his head & light yellow-gold fur on his body. He has some "feathers" on his back legs, but a more lab-length coat. 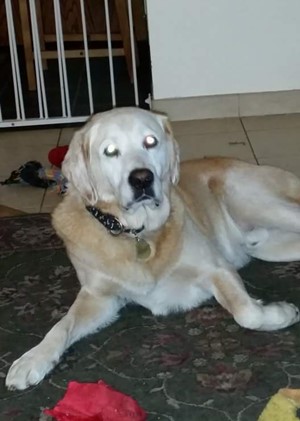 He was loving surrendered back to RAGOM by the family who had adopted him 4 years ago. Jesse suffers from storm anxiety. He takes amitriptyline twice a day to help manage his anxiety. When a thunderstorm happens, Jesse also takes lorazepam.  He trembles, pants & tries to find a safe place. We have had one storm since Jesse came to our home one week ago. After the medicine was given, his trembling decreased and he snuggled on the couch with us. He pawed at us & wanted to be as close as possible, hiding his head between my back & the couch. Jesse would do best in a home with somebody home most of the time. During thunderstorm season, he should not be left home alone if a storm is possible. His previous family brought him to doggy daycare, when they couldn't be at home, if a thunderstorm was a possibility.

Jesse enjoys free roam & can be left alone for a few hours or so when the weather is good. So far, I've left him for about 4 hours at a time without any problems. He respects baby gates. My gate has an opening for the cats &  he did sneak through the cat opening once so now the cat door is closed. Jesse is getting along great with the cats & dogs that we have. 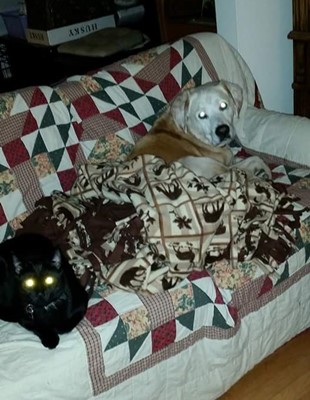 He enjoys tug-of-war with both people & our dog. He knows how to "sit", "stay" & "shake"--with both paws! He gently takes treats from us. He has  a fun food puzzle toy that he'll roll with his nose to make the pieces of kibble fall out.

Jesse rides great in the car & jumps into & out of our Ford Escape easily. Jesse loves going on walks. He wears a Gentle Leader Easy Walk harness. He met 4 children in our neighborhood & sat quietly so they could all pet him. He thoroughly enjoyed that! He spent a day with me & my 2 year old grandson & we all had a good day.

Jesse is up to date on his vaccines & taking Heartgard chews. At his vet appt, we were told he was at the high end of a healthy weight. Since I am too, we're adding more walks into our schedule. 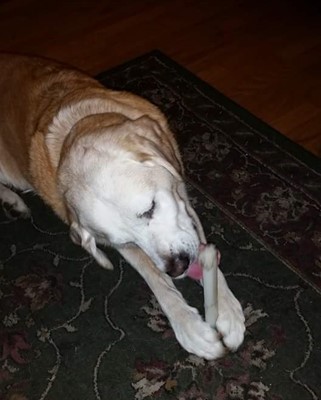 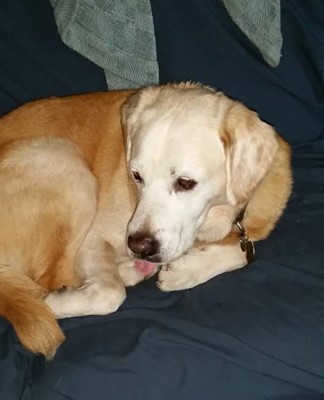 Jesse's original bio and updates from 2012 are listed below: