Maisy was initially surrendered to RAGOM in late 2012.  She had to have emergency surgery to remove an intestinal blockage because she had eaten a sock.  Maisy was adopted in February 2013.

Miss Maisy Mae is back with us. She was adopted several months ago but developed acute allergies, and the family made the difficult decision to surrender her back to RAGOM.  She just had her 6th birthday.  Happy Birthday pretty girl! 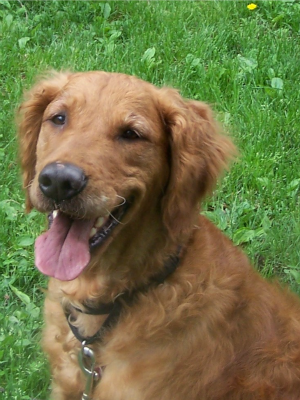 Maisy weighs 65 lbs and has a short wavy dark red coat with cute curlicue ears.  She has the most expressive face I have ever seen in a dog—you can look at her and see just where she is at. When she first got here she had deep worry lines in her forehead. I massaged her forehead and sinuses, and watched as her face relaxed and the lines melted away with each passing day. She has a beautiful big snout. I suspect she has an incredibly developed sense of smell. She sure likes to take a leisurely walk out here in the country and smell everything she comes across! 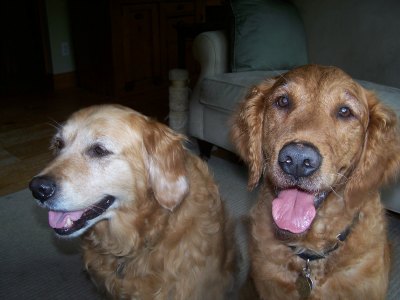 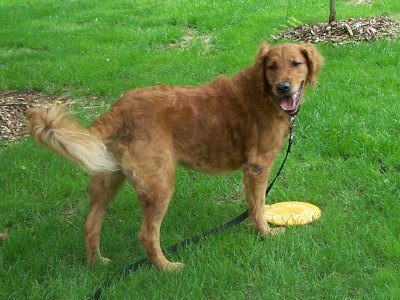 She slipped right back into the family routine and gets along great with the two resident dogs—they all remembered each other. She looks to one or the other for cues, for example she’ll follow them outside to go potty.  She loves being around the dogs but doesn’t necessarily play with them. When I throw the Frisbee for Annie she’ll intercept it and then play keep away. I have not seen any resource guarding around toys at all, and I suspect she’ll learn to play with her buddy once she is settled in her forever home. The two cats are ‘out and about’ and very comfortable with her here. The first night back with us she hopped up on the bed and that is where she has slept since. She has free roam of the house with no problems. I do pick up soft toys and put them away when I leave just to be on the safe side (she ate a sock and needed surgery when she was with her original family). She wants me in sight at all times and follows me everywhere. When I work at my desk she’ll wedge into any available space and lay down, as long as some part of her is touching me. 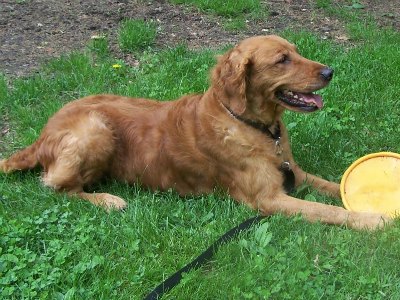 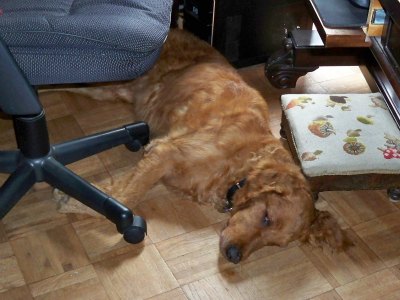